Those are words no boater every wants to hear or shout out. The connotation of taking on water in a boat to me means sinking, drowning and meeting a watery grave.

Well, luckily for me (us) that wasn’t the ending that happened a few days ago when I heard those fateful words being shouted up at me from the lower deck.

We had a route and timetable all figured out for our trip from Tenedos Bay to Blind Channel. We were geared up to transit three major rapids to get there and had a marina reservation confirmed. The weather was spot on perfect, not a cloud in the sky or a ripple in the water as we motored out into Desolation Sound.

Motoring out of Tenedos Bay.

The Beach House was running about 10 knots pushing against some current when there was a strange shift in the engines…seemed they were not syncing well through the Mathers Electronic  Controls. Wally went down to do an engine room check and that’s when I heard the words every boater fears….

“Stop the boat…the engine room is filling with water”….

Wally literally flew up the flybridge ladder and started pulling things out from under the seats…the bilge pumps were working overtime but water was still flooding in. He flew down the flybridge ladder again with a 1000 gallon per hour emergency pump and hose in his hands.  After dropping the emergency pump into the engine room, we got the generator started to run it and started pumping water overboard.

I love this pump….

My heart is racing again as I write this but I can honestly say that neither of us panicked. It actually took us at least 5 minutes or more to get all that going and we both knew water was flooding in.

The starboard side of the engine room sans the water…really didn’t have the time to take photographs in the middle of our emergency!

The calm, flat water in Desolation Sound afforded us the ability to easily let the boat float unattended with the engines idling while we started troubleshoot what the hell was happening. My first thought was that the raw water pump repair that Wally had done a few days prior had somehow failed, we both agreed that was a good place to start troubleshooting and decided to shut down the starboard engine.

Ironically, there was not a boat in sight for miles and I had been thinking about what we would do if the water continued to pour in. I really didn’t want to call a mayday or pan pan on the VHF radio until I was sure we needed help or that this was a full-blown emergency.

The port engine was still idling in neutral, so as the water continued to pour out of the engine room and overboard, we pull the engine hatch in the salon of the boat to get a better view into the area that the repair had been done. All looked well there, no evidence of any failure and the hoses were all intact and attached.

So now we were a bit stumped, since the water was receding rapidly and we weren’t taking on anymore it was unlikely that we had hit something, sheared off a prop or strut so now what???

Once all the water was out of the engine room and the bilges had been pumped dry, we started to motor on one engine for Refuge Cove. We knew there was a dock there where we could stay for a few days. Seriously, yes Refuge is just what we needed, well and a big shot of Deep Eddy Vodka.

I am not sure how many gallons we took on but I know is was hundreds. Yes, the boat could have sunk eventually had we continued motoring on, obvious to what was going on.  I doubt we would have drowned and sunk to a watery grave because we have a dinghy we could have early gotten into and been safe.

Later, after we were securely tied up at the dock in Refuge Cove and had that drink, we talked about what happened and how we reacted. While still a bit shaken, we both agreed we did all the right things. Being prepared, with plan of what to do should the boat take on water afforded us the ability to stay calm and follow the plan.

Turns out this 1.5 inch elbow water hose from the heat exchanger to the exhaust riser had a 3 inch split in it. WOW, talk about an adrenaline rush kinda day. Now we just have figure out where to get that hose as it one of the few spares that we don’t have onboard. 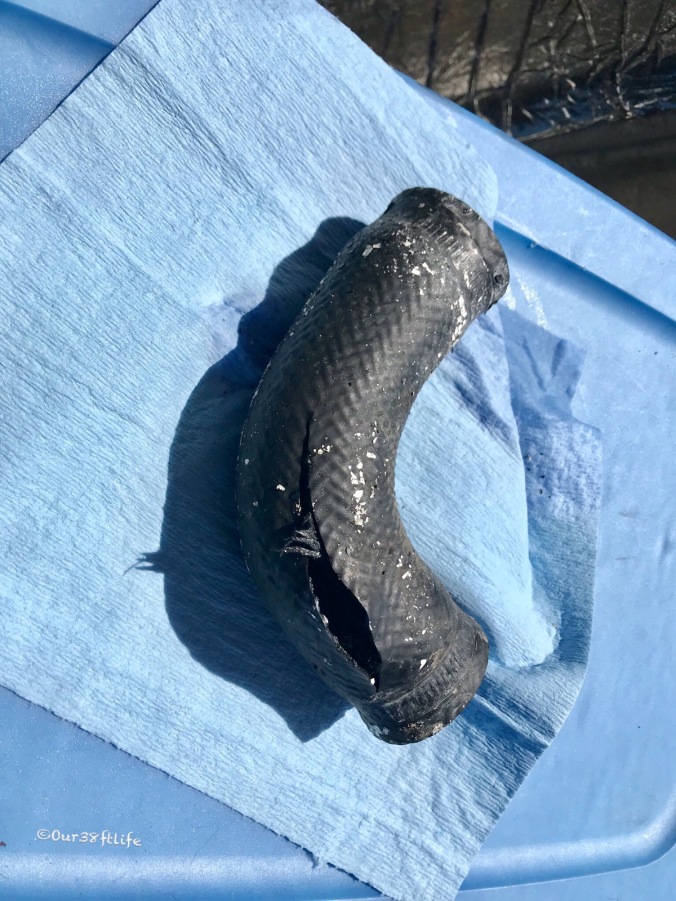 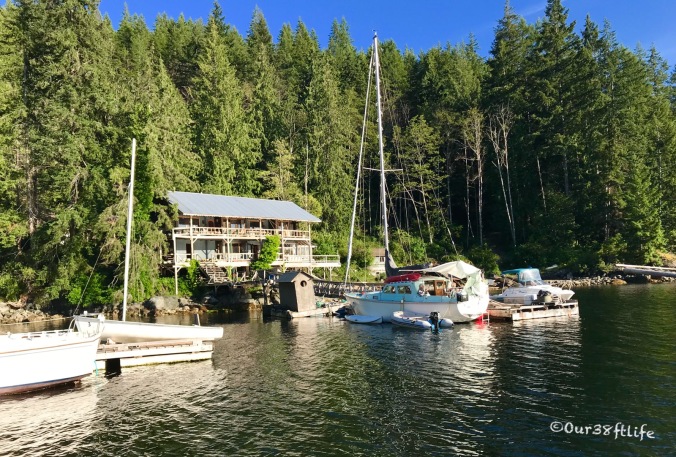 The tiny community of Refuge Cove is all connected via boardwalks along the water…no cars on this island.