Yippee Skippee…we are in the Broughton Islands but thanks to limited cell and internet services (welcome to the wilderness) along the way, I haven’t posted any news for several days so I will try to catch you up.

Our last big hurdle to getting this far north was based on the temperament of Johnstone Strait. Many a mariner has had their ass handed to them on a platter when the ferocious winds howl down this 110 km (68 mi) channel along the north-east coast of Vancouver Island in British Columbia, Canada. The strait is between 2.5 km (1.6 mi) and 5 km (3.1 mi) wide so the water and wind channel right down through there. It is a major navigation channel on the west coast of North America.  There are ways to limit ones passage through Johnstone by taking some more sheltered routes through Desolation Sound but at some point you have no choice but to get your bow out in the strait.

The weather looked great on Thursday the 28th, light and variable winds in the morning as opposed to the 10-20 knots it often is. Johnstone is well known for the winds building to 20-25 knots by early afternoon. We got a very early start to take advantage of the light wind and the ebbing current to help carry us along faster. We also opted to take the route through Blind Channel into Johnstone, up past Race and Current Passages. This route put us in Johnstone longer but with the great weather forecast we were willing to take the chance, get an early start and off the strait before the afternoon winds could whip it up. We were rewarded with very light chop, less than 5 knots of wind and a very pleasant day on the water. No ass whoopin for us…that was cause for celebration!!!

In route, we saw Randy and Rusty  (that we met at Blind Channel Resort) on Johnstone Strait near Port Neville. We tooted the horn and gave them wide berth as not to swamp them with our wake. They were flying along, sails up taking advantage of the ebb current too. No ass whoopin for Randy and Rusty either!! 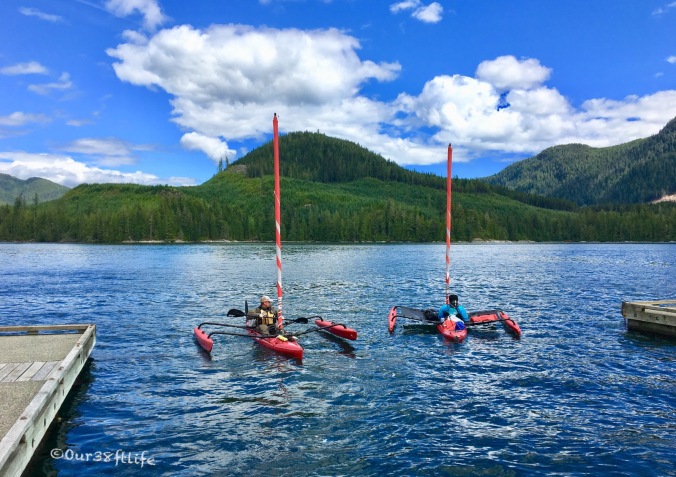 The Beach House was anchored in Cutter Cove which is well into the Broughton Islands by the early afternoon. On a fair weather day, this anchorage is calm and protected plus we were the only boat there.

Beach House on the hook in Cutter Cove.

We took the whaler out to explore and did a fast cruise in the light misty rain that set in, over to the now defunct Mistral Bay Resort. We have heard lots of stories about this resort when it was in full swing as a friends family once owned it. The resort is just a shell of aging buildings and crumbling docks now – so sad. The docks can be used at your own risk for free and we chatted with a couple who were tied up there for the night. The whole place was just depressing and I was glad we were on the hook at Cutter Cove.

A celebration dinner was in order…Grilled Lamb Chops with Argentina Chimmichurri Sauce, Roasted Red Potatoes with Rosemary and Garlic along with Grilled Red and Yellow Peppers. Chef Brenda served a Cabernet Sauvignon from Upchurch which is in the Walla Walla Valley.

We swung on the anchor that night, peaceful and quiet so we slept great.

The following day, not in a big hurry anymore, we motored out of Cutter Cove around 10 am with Kwatsi Bay routed as our destination. It was only 22 nautical miles so we dialed back the engines to putter speed, about 8 knots. It was raining and misty but the water was calm and flat. – no real wind.

Our cruise got quite eventful about 5 nautical miles from Kwatsi Bay … eventful in a good way. We spotted Pacific White Sided Porpoises fishing and frolicking in groups all around us. I would guesstimate that there was easily 50 of them. Soon we were the source of their fun. It was unbelievable… they jumped, leapt and sped through the water next to the boat on both sides for miles. 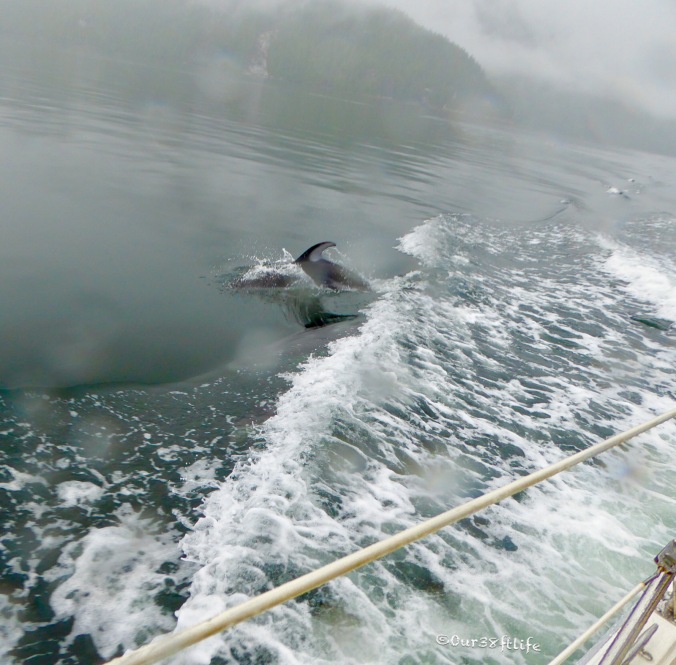 I was hanging out the salon window clapping and laughing as they performed  their aerobic water ballet for me. I just focused the camera near the side of the boat doing burst shots in hopes of getting one decent picture.  It was an amazing show as porpoise sped by the salon window, often three at a time, leaping out of the water right in front of me, then dashing under the bow, leaping out across each other. I swear they knew I was there watching their beautiful show. 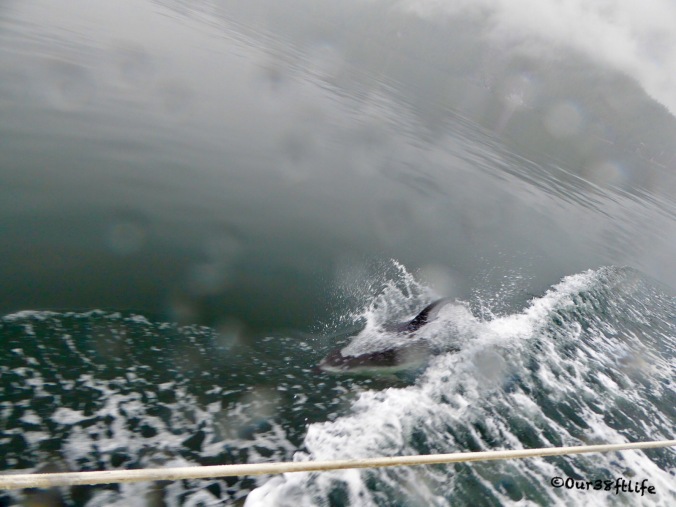 Wally watched their show off the bow from the flybridge as he just motored along on autopilot. The porpoise seemed to really like the wake our boat was throwing up. They would cue up in the smaller wake the whaler was throwing, then gain speed as the wake got bigger along the side of the boat. Did I say it was unbelievable and beautiful…truly the most amazing thing we have experienced in the boat!!!

I was so bummed I didn’t get the whole porpoise in this shot but I love the reflection in the water.

Kwatsi Bay Marina is rustic to say the least but in a charming way. Max and Anka have built this place up from scratch over the last 20 years. Just one 400 ft aging wood dock with no power. There is a tiny gift shop and a gathering place for the evening potluck happy hour. Cold, clean water abounds… Hydro power, that they installed is generated from the enormous waterfall that cascades down from the 4,500 ft peaks behind the marina. We love these kinds of places, quaint, charming and intimate. 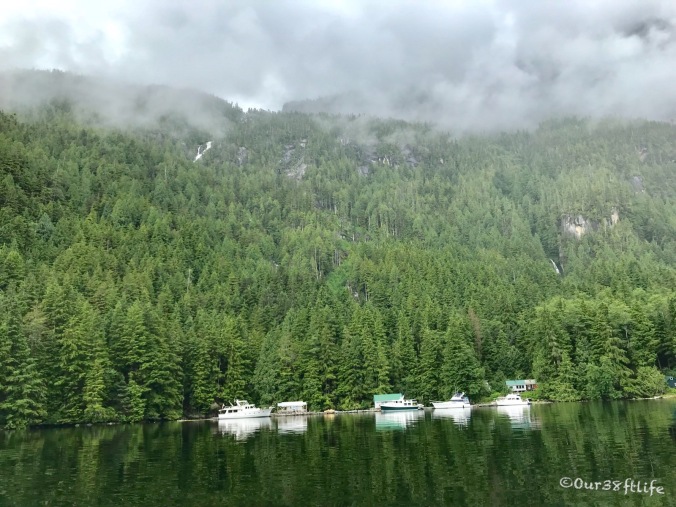 It was a rainy day for sure, but we got a break from 2:30 to almost 10 pm. We spent the afternoon exploring the beautiful bay in the whaler and on foot as well. There is a short hike to the lower part of that enormous waterfall, which is actually just one of many that ring the bay. 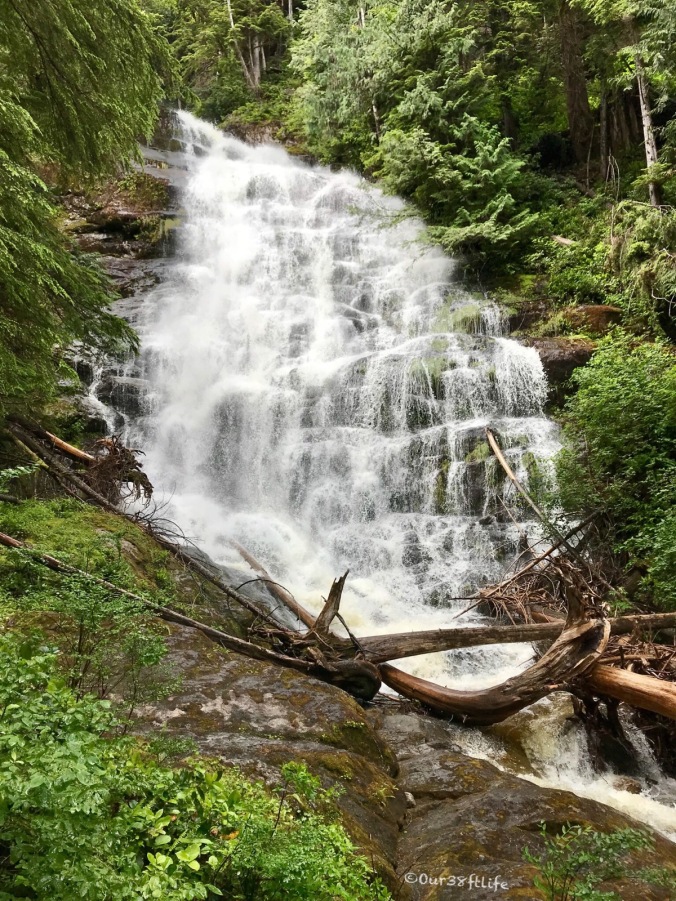 Happy Hour was at 5 pm back on the dock. We spent a few hours easily chatting with our hosts and the other two couples that were staying on their boats on the dock. Everyone was happy to share with us their favorite anchorages and places not to miss exploring. The next day we are off for Pierre’s Echo Bay Marina and Resort.