We have spent the last 15 plus years boating in the San Juan Islands and until this summer we have rarely had time to spend time in to really explore many of the islands. Thanks to our new-found freedom called retirement, we have been able to spend all summer on the boat. While Beach House did venture into the Canadian Gulf Islands, we spent the vast majority of the time in the San Juan Islands enjoying some of our favorite anchorages as well as exploring some new ones.

Exploring Orcas Island had been on the agenda for September when the summer tourism crush starts winding down. We had been on the island years ago but not for more than a day so we were looking forward to renting a car for a few days and really seeing more of the island.

Orcas Island is slightly larger, but less populous, than neighboring San Juan Island. The island is shaped like a pair of saddlebags, separated by fjord-like Eastsound, with Massacre Bay on the south side, and tiny Skull Island just off the coast. At the northern end of the island is the village of Eastsound, the largest population center on Orcas and the second largest in San Juan County. Recreational opportunities abound, the Washington Ferry stops at the island, there is plenty of restaurants from quaint to 5 star, shopping, art galleries and ridiculous views for watching the sunsets. For us boaters, there are limited places to anchor and only two public marinas, both of which are not conveniently located for exploring unless you have a car. No matter, a car rental is easy enough, expensive but worth it for the freedom to see more of the island. 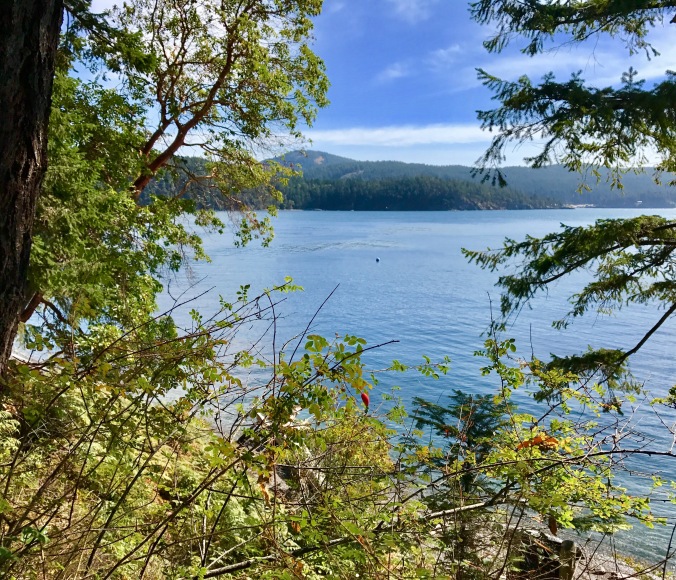 The Washington State Ferry does make a stop on Orcas, so you certainly don’t need a boat to visit the island. Drive on the ferry in Anacortes and voila …you are delivered to Orcas with your car. There are plenty of small inns, Bed and Breakfasts and rustic resorts to choose from. We visited West Beach Resort on the northwest side of the Island which is the place to be for spectacular sunsets! The resort has small cabins, many right on the water, is pet friendly and the small cafe makes a killer chocolate espresso milkshake!

East Sound is the main village on Orcas and is teeming with restaurants, art galleries, a local brew pub and well stocked grocery store. We enjoyed a fabulous lunch at Roses Bakery Café and visited a great pet shop to buy new Kong balls for the Frito Bandito The Frito Bandito and the First Aid Kit. This time we bought balls that float as to many toys have drowned on this trip so all new toys must know how to swim or at least float! 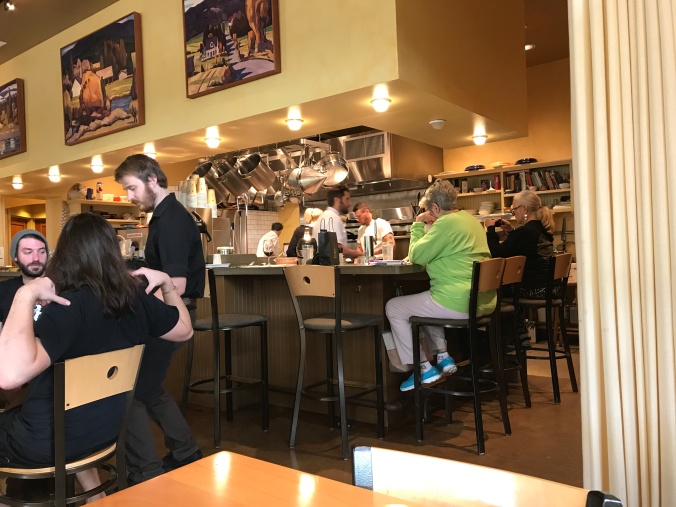 Great farm to table cuisine at Roses Bakery Cafe.  The bakery  is a great place to stop and provision for a picnic.

We love talking to locals and nothing is a better conversation starter than a dog. We have met so many people, learned so much about the areas we are traveling in by simply being open to meeting new people and brave enough to start a conversation with a stranger. Even with his grumpy demeanor, Bentley attracts people who always want to meet him.

Not only did we get great restaurant suggestions but also favorite hiking trails, where not to bike, best sunset beach and best bar. One of our other favorite meals, which was well endorse by several people we chatted with was at Buck Bay Shellfish Farm. We took a baguette and cheese picnic, feasted on a dozen freshly harvested, local oysters. Funky and quaint along with great view plus the BYOB policy made Buck Bay Seafood Farm a great picnic stop. They also have a super cute B&B room you can rent. 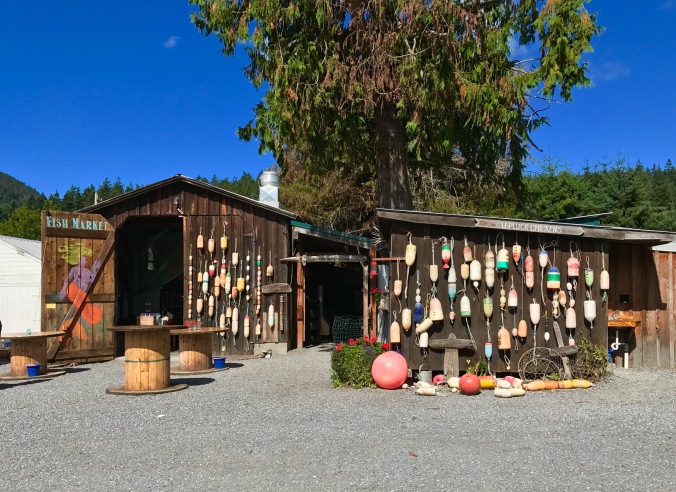 Hey, what happened to the dozen oysters we bought??

Orcas has two stellar hiking areas,  Moran State Park and Turtleback Mountain Preserve. Moran State Park is the bigger and more often visited of the two as it boast Mt. Constitution which rises nearly a half mile high above Orcas Island, and is the highest point in the San Juan Islands. Sitting on the crest is a stone tower replica of Russian watchtowers constructed in the Caucasus during the 12th century. In the 1930s the Civilian Conservation Corps constructed this tower and the road and bridges which lead to the summit of Mount Constitution. From the tower you have a 360 degree view of the surrounding area including shots of Mount Baker, the North Cascades, and the other islands of the San Juan Archipelago. On a clear day the views are jaw-dropping beautiful. 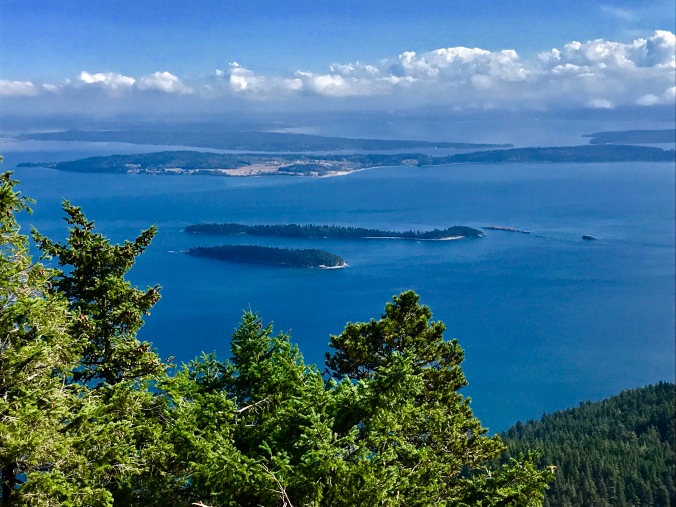 No trip to Orcas Island is complete without a visit to the top of Mount Constitution; a perfect culmination for hikers and bikers in Moran State Park. If you are able to bike to the top, kudos and mass appreciation as all I saw was a serious ass whooping. Personally,  I preferred driving to the top and then going for a hike! 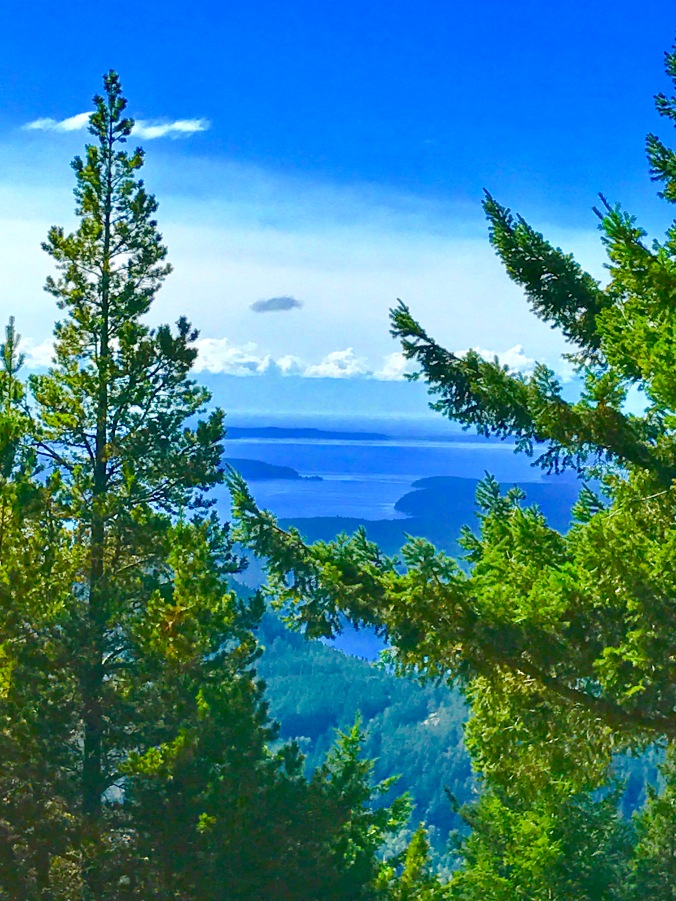 Turtleback Mountain Preserve is all about the hiking as there are no lakes or campgrounds like Moran State Park but the views are every bit as spectacular. We did a strenuous 3.5 mike hike that took us through beautiful filtered forests, savannah like areas with old oak trees and the views all around were unbelievable.

So of course, after a hike it is important to replenish fluids, right? We headed over to the only brewery on the island – Island Hoppin’ Brewery to sample a couple of their craft beers. It seemed many others felt the same way, as it was hoppin’ when we arrived. The beer was great, my favorite was the K-Pod Kolsch with 5.2% abv and 18 ibu’s. The bartender, well, he was a dud. Nice to look at but so not interested in chatting about the beer.

We also took a drive to Rosario Resort and Museum to check out the new marina and have a beverage in the bar. The resort is on the National Register of Historic Places and has quite a history. Built by Seattle Shipbuilder and Mayor Robert Moran in 1906, the now resort was originally built as a private residence, with the centerpiece of the mansion being the Music Room, featuring a two story 1913 Aeolian pipe organ, 1900 Steinway grand piano, a Belgian stain-glass window picturing the harbor at Antwerp, and two mezzanine libraries overlooking a Tiffany chandelier, which depicts various performing arts. If you do spend time on Orcas, Rosario is well work the drive as the mansion/museum is open to the public for self-guided tours daily and there are organ concerts and a Rosario history narrative on Saturdays. The restaurant gets good reviews and the views out over Eastsound are beautiful. Of course you can stay there too! The property was recently purchased and is going through a much needed face lift. The new marina looks really nice and is a big improvement over the old one. In addition to replacing all of the docks, the improved breakwater means more protection inside the marina.

We really enjoyed our time at Deer Harbor Marina … so much that somehow our two nights turned into four. This is a full service marina, with a fuel dock, pump out, small store and café, laundry and garbage drop off…everything a boater really needs. There is a nearby pizza place and the Deer Harbor Inn Restaurant, which will pick you up at the marina in a limo for dinner. Sweet! Our meal there was good and we were able to sit outside on the deck with a view of Deer Harbor and Crane Island off in the distance. We also took advantage of the free use of the marina van on two different days. 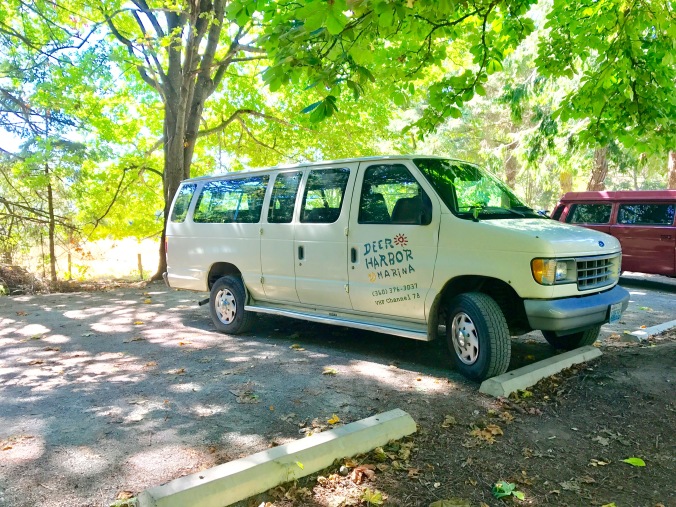 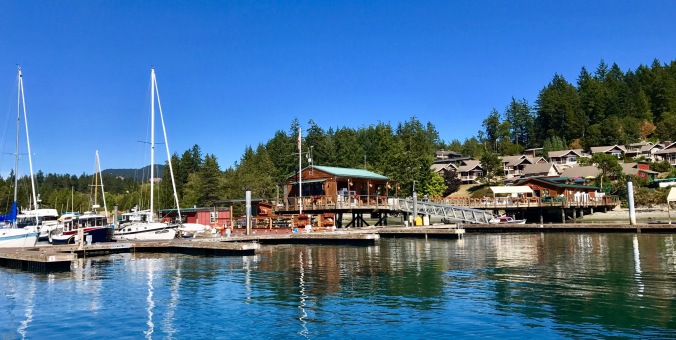 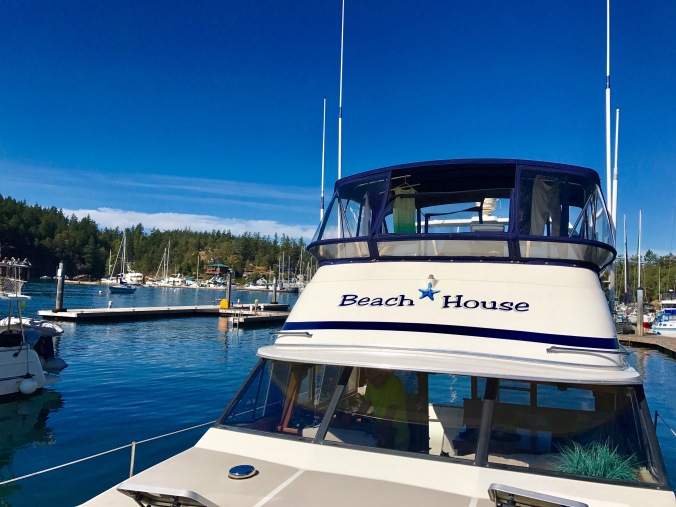 Renting a car on Orcas was easy. A quick phone call to Orcas Island Car Rentals and voila, a sassy PT Cruiser showed up in the parking lot the next morning with the keys in the ignition. So small island! Only bummer was they have a no pets in the cars policy so Mr. Bentley did not get to go cruising with us!

The local clams from Lopez Island were amazing.

Hiking, great restaurants, a local brewery, fresh oysters, views of the water and islands at every turn, quirky art gallery’s, quaint farm stands, fresh blackberries on all our walks, Wow, who knew that Orcas has so much to offer. So glad we finally had the time to explore Orcas Island and I hope you get a chance to spend some time there too.

3 thoughts on “Orcas Island, another gem in the San Juan Islands”