Imagine stumbling onto a site so incredible, so beautiful, so old, yet so alive that you are torn whether to keep this place secret to protect it or to reveal it to the world so that the beauty and scientific wonder of it can be enjoyed by generations to come.

This is the secret that cavers Gary Tenen and Randy Tufts discovered in 1974 and held secret for 14 years. After their amazing discovery, they knew this was a place like no other and knew it was a place that needed to be preserved. The two men had just discovered a cave on par with the finest caves in the world. And unlike some other popular caves, this one was still alive. By comparison, the world-famous Carlsbad Caverns is mostly dry. Another famous cave, Colossal Cave, is dry and dusty. But the wet, dripping quality of this newly discovered cave meant that the 40,000 – to nearly 200,000-year-old flowstone, stalactites, and stalagmites were still growing. After gaining the cooperation of the Kartchner family and working with them for ten years, together they decided that the best way to achieve the goal of protection through development as a tour cave was to approach Arizona State Parks.

More on the discovery of the caverns

The discovery of the cave was finally made public in 1988 when the landowners sold the area to the state for development as a park to showcase the caverns. Prior to its grand opening in 1999, yes, over 10 year later, the state spent $28 million on a high-tech system of air-lock doors, misting machines and other equipment designed to preserve the cave.

I can’t even begin to describe the beauty that these underground caverns hold. Pulling into Kartchner Caverns State Park you have no idea what is in store for you. The vast, high desert terrain is holding its secrets close and only thanks to those two crazy cavers will those secrets be revealed to you.

Our tour of the Rotunda/Throne Rooms was led by a knowledge and amusing young park guide, Suzanne. She used humor to help our small group of 20 people understand why we could not touch anything as we could effect this living cave and damage it irrevocably. And trust, me you wanted to touch it.

The tour was a half of a mile in length and took approximately an hour and a half to complete, 50 minutes of which is underground. The moist, damp humidity inside the caverns was a welcome change form the dry desert. We learned the role that water plays in creating the caverns, saw the discoverers’ original trail, delicate formations and “Kubla Khan,” the largest column formation in Arizona, over five stories tall. 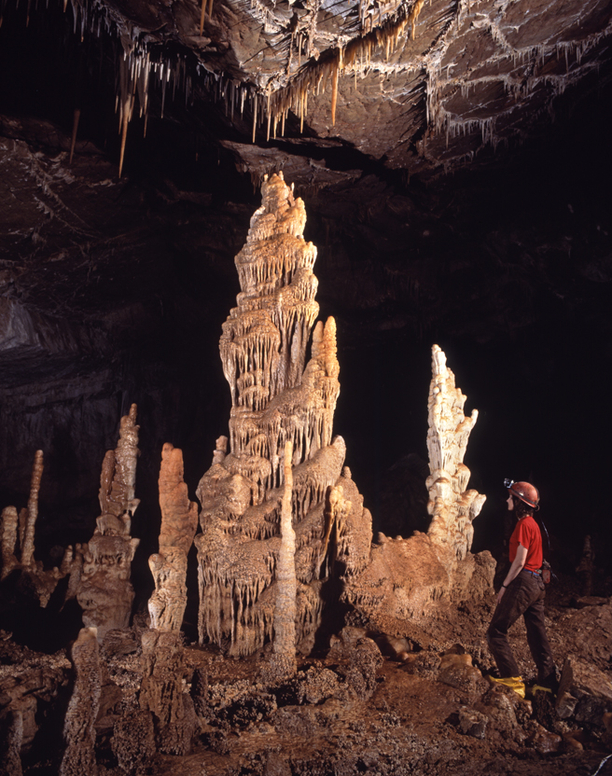 The caverns have stringent technical controls: heavy steel doors keep out hot desert air, a misting system maintains a relative humidity of at least 97.5 percent and low-intensity lights inhibit algae growth. Once inside, the two main galleries are a kaleidoscope of color with 100-foot high ceilings dripping with multihued stalactites and floors jutting up with matching stalagmites. Giant white columns form where the two meet. Dainty white helictites, translucent orange bacon, and shields of white calcite adorn this natural wonder. An extraordinarily thin stalactite, called a soda straw, hangs tenuously 21 feet 2 inches down from the cave’s ceiling. Rare quartz needles form “birds nests” and nitrocalcite “cotton,” and an extensive array of microscopic brushite moonmilk are found here and in only a few other caves in the world. 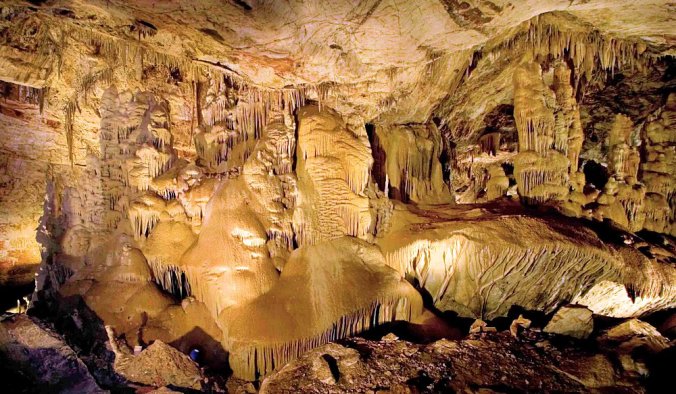 Years of research and plain hard manual labor made these Caverns accessible to the public. I will admit to be completely blown away, mesmerized and left in awe of what I saw on our short time underground. I could have stayed there all day and left wishing I had had a chance to meet Gary and Randy. So many questions were racing through my mind.

No cameras are allowed inside the caverns, so I can’t take any credit for the photographs in this blog post. Thanks to the internet, I found some images that would perhaps convey a small fragment of what we saw in our short time underground. Pictures can not do this underground wonder justice, they can’t convery the beauty nor the depth and size of the formations. All I can say is that you really must put Kartchner Caverns on your bucket list.