Today’s adventure included exploring The Kapoho Kalapana Road, also known as the Red Road, which travels 15 miles along the coastline of the lower Puna district on the Big Island. Located in a remote and sparsely populated area (southeast of Pahoa village), this road takes you through some of the most spectacular scenery reminiscent of the old Hawaii of yesteryear. It used to be paved with red cinder gravels, now black asphalt, but local residents still affectionately call it the Red Road. Arguably, this is one of the most scenic roads in the state of Hawaii. Yet it seems that not many visitors have discovered it and we were lucky to be following the advice of the Aloha Hola Guesthouse owner, Michelle. She laid out a great itinerary for us which included a visit to the Kapoho Tide Pools, some local dining options and grand finale, which would be the 8 mile round trip bike ride out to the end of the Chain of Craters Road to see the lava flowing into the ocean.

We started our day at the Lava Tree State Monument which is a public park located southeast of Pāhoa. The park has a 0.7 mile walking trail which showcases the lava molds of the tree trunks that were formed when a lava flow swept through a forested area in 1790. The park is situated in a lush rainforest and the plant life was beautiful. Wild orchids climbed the albizia trees which were surrounded by red and yellow hibiscus. 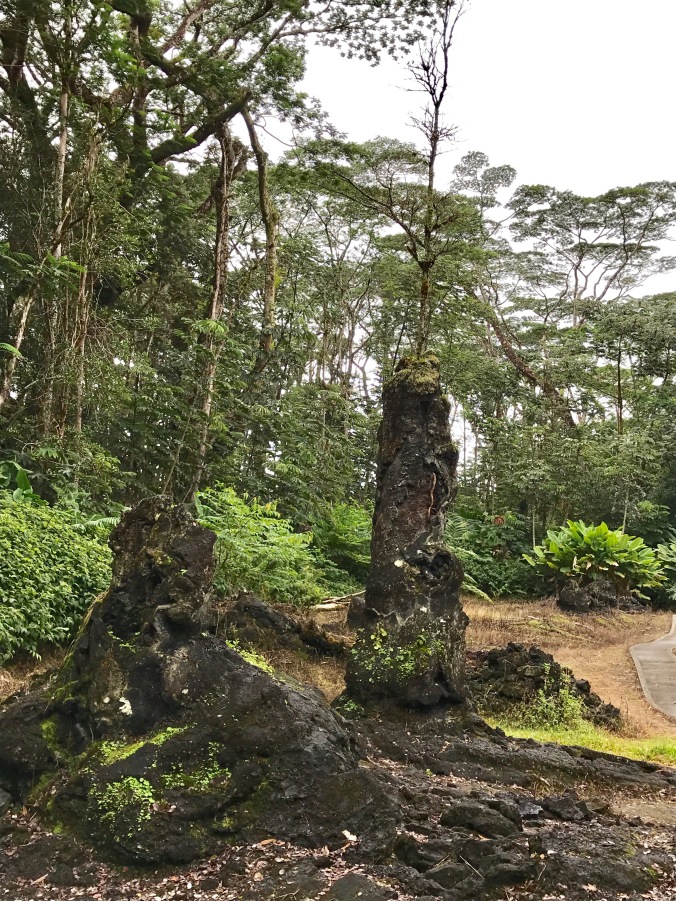 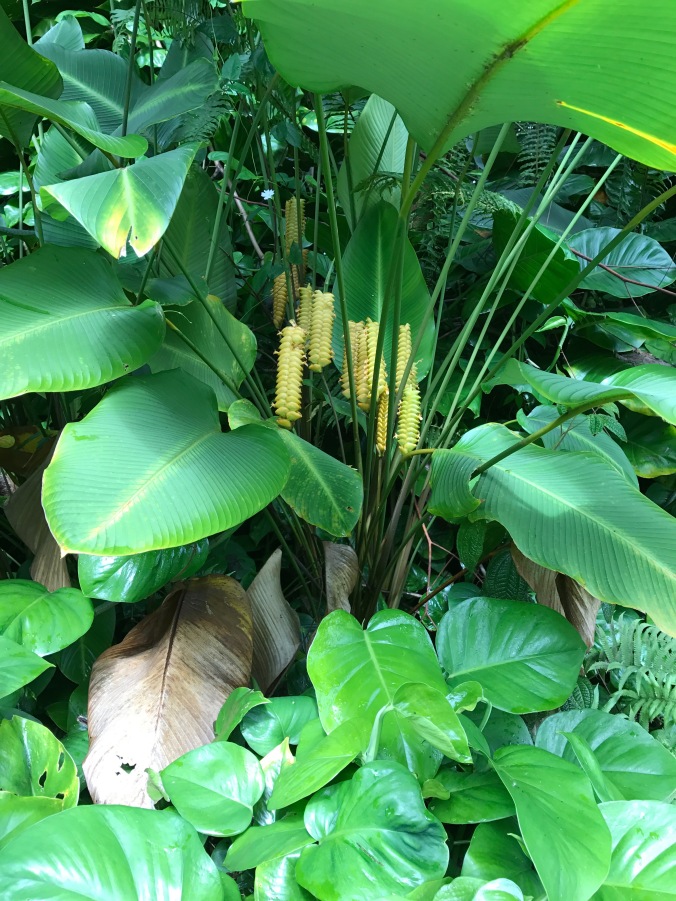 The park was mostly deserted and the surf was incredibly high so we wandered the park taking photographs and found ourselves mesmerized by the powerful, wild surf. Wally noticed a gal at the park who seemed just as enthralled and asked her if this crazy surf was normal. She said, NO, that the surf had not been this high since the 2014 hurricane and her house shook all night as the ocean pounded into the cliff near where her house was built. 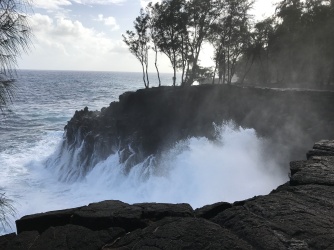 Our next destination was the Kapoho Tide Pools, which are considered to be the best snorkeling on the Hilo side. While it is a marine life preserve, you are still able to swim and observe the wildlife in the naturally warmed pools. To be honest, after seeing the surf I couldn’t imagine snorkeling anywhere along this coast so we made our way there with some trepidation. Thanks to Michelle’s directions we found the “locals” favorite entry spot into the tide pools, which was at the end of the long cove in the picture below. The surf was indeed crashing in the distance but the tide pools were surprisingly serene. This location is unique for many reasons, one of them is the fact that, it is fed by naturally heated fresh spring water. This unusually large collection of tide pools and spring fed pools stretches almost a mile down the coast and extends up to 200 yards out into the ocean.

The snorkeling was indeed amazing and we stayed in the inner pools as the current further out was really ripping. In addition to the fascinating underwater relief, there was a wide variety of fish to be seen. Schools of Tang were abundant and often times followed us like we were the Pied Piper! After a good swim and an hour of snorkeling we had worked up an appetite, so we packed up and hiked back to the car. There are no facilities at the tide pools so we were a but salty and disheveled. We back tracked to Pahoa, the Tin Shed Bakery was our destination. Funky, local and delicious plus the people watching was as good as the food. We blended right into the scene, salty is not a problem at this local eatery. This place really is a tin shed so if you aren’t okay with a local vibe this might not be your place. Personally, I have a major crush on Pahoa! 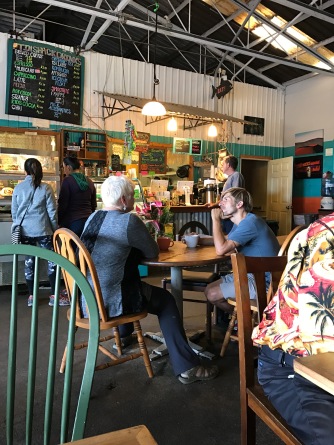 Fully satiated, we headed back to the Red Road . The drive followed the rugged coastline, sometime curving so close to the edge of the cliff that we could see the crashing waves up from below, sometime burrowing through a dense tree tunnel where dangling jungle vines would touch the roof of the car! We wound through rocky lava fields, lush coconut groves, tropical rainforests, old plantations, black sand beaches (one is a very popular surfing spot), peaceful oceanside parks, and a few quaint residential neighborhoods. This winding one-lane road is barely wide enough for cars to pass each other. 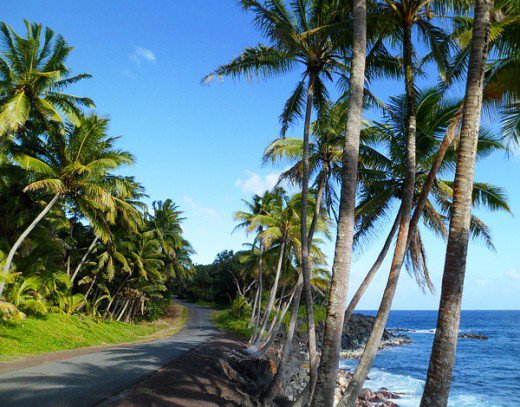 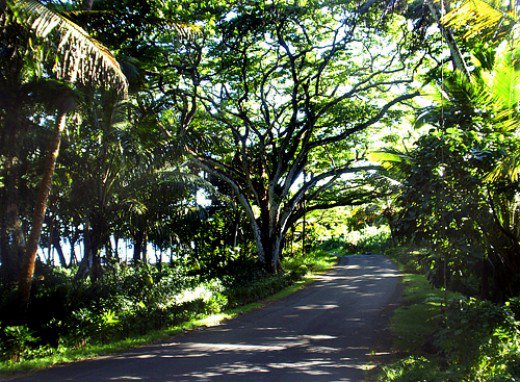 Our final destination for the day was the emergency access road that follows the path of the former Chain of Craters Road, which once linked Hawaii’s Volcano National Park to Hwy 130. Lava flows from Kilauea’s East Rift Zone began pouring down on this 8 mile stretch of Chain of Craters Road in the 1980’s, and by 1990, when the village of Kalapana was covered, most of that road was beneath many feet of new lava. The gravel road we rode on actually owes its existence to lava. The road was hastily constructed as an emergency route when another lava flow came within just a quarter mile of crossing Hwy 130 back in 2014.

From this access point we would be able to rent bikes and ride in 4 miles to see the current lava flow at the edge of the ocean. It was hot, dusty and somewhat busy when we arrived at 4:30 but we quickly rented nice “lava” bikes, flashlights, head lamps and off we went. The road is packed lava gravel and undulates with the flow of lava that is now underneath it. Believe it or not, some folks still live out here, it is truly off the grid, unworldly and a bit like a scene from the movie Mad Max.

The lava steam plume was visible for our entire ride which added to the excitement. After stopping for several water breaks, maneuvering pass access barriers, dodging cars, three wheel vehicles and hikers, we made it to the end of the bike access, where we locked up the bikes. From there, it was a 15 minute hike over rough, twisted lava to the waters edge where the lava was flowing into the ocean. The meeting of molten lava and crashing sea surf created a tumultuous steam plume rising hundreds of feet into the air. We could see chunks of lava being tossed into the surf. Our photographs just can’t capture the raw beauty and power of the meeting of the earth and sea. 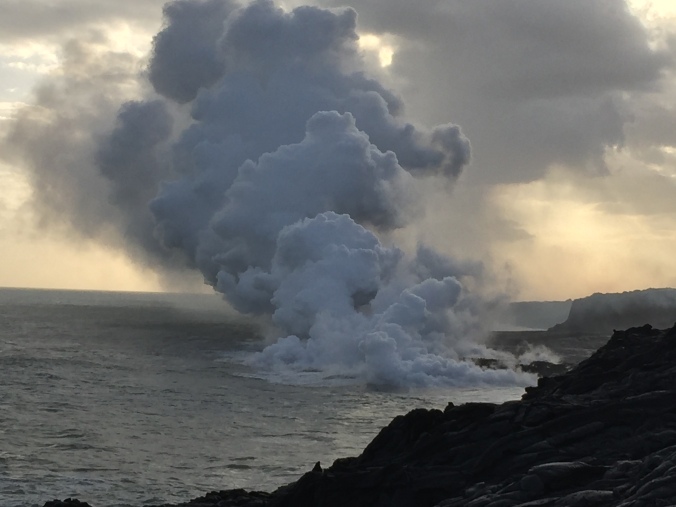 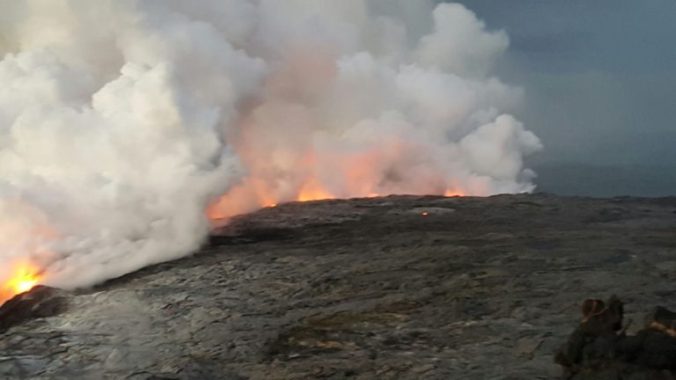 The sun had set and darkness was descending when we started the 4 mile ride back to our car. I greatly appreciated the coolness of the evening on the ride back and the flashlights that were attached to the handle bars of our bikes. Thankfully, we did not need any help from the emergency services folks that were stationed along the road but we did see a few people that did!

Having become adept at cleaning up and changing in the car, we made our way back to Pahoa for dinner at Keleo’s Bar and Grill. A mango passion fruit martini set things right, the seafood curry and the ahi tempura roll was the best meal I had eaten on the entire trip. Quite a day, to say the least.