Some place are simply hard to capture through the lens of a camera but Joshua Tree National Park has got to be one of the most photogenic place we have been this winter. I am a very amateur photographer so you can bet I was thrilled when I started viewing the beautiful park iPhone pictures on a larger iPad screen later. Joshua Tree was good to me for sure. 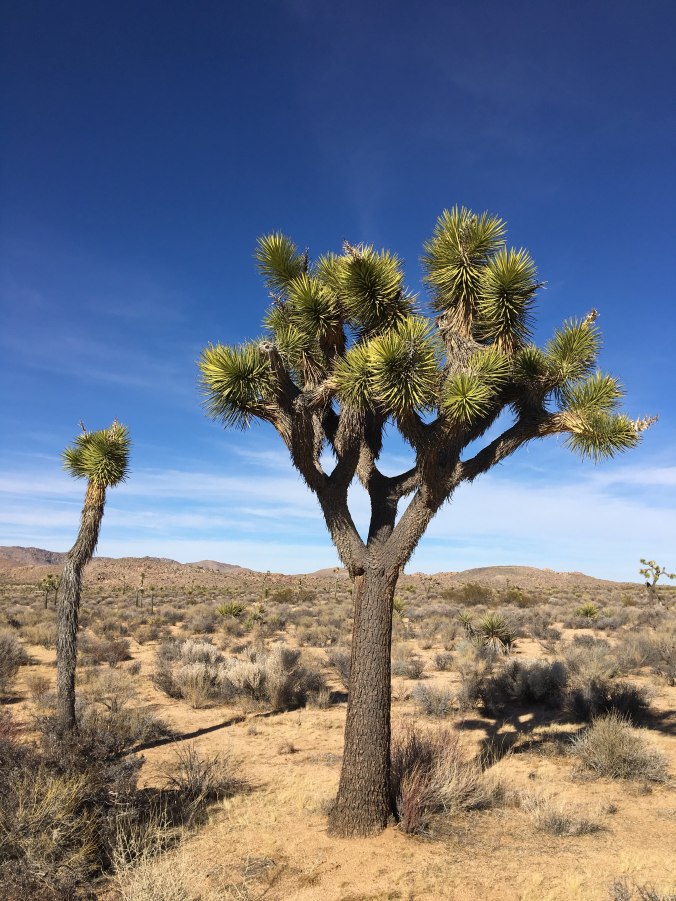 That’s a fine looking Joshua Tree!! They are actually part of the Yucca family.

Not only is the park a beautiful place to photograph, the hiking is great too. It has been over 20 years since we had visited Joshua Tree so we spent the day getting reacquainted.

I love the texture that you get when taking photos in the desert.

With two distinct desert ecosystems, the Mojave and the Colorado, Joshua Tree National Park has a fascinating variety of plants and animals who make their homes in a land sculpted by strong winds and occasional torrents of rain. The risk taker side of me is really jonesing to be in the desert when a major torrential downpour happens. Not so crazy as to want to be hiking in a slot canyon but perhaps somewhere high enough to safely watch all hell break loose!

The park website has some great info on safely visiting the park (okay, no info on where the best place is to watch a flash flood) as the weather can be extreme and there is no cell service inside the park. “Remember, your safety is your responsibility”. Hmm, was that directed at me specifically???

Great boulder climbing in the park.

Dark night skies and the surreal geologic features make Joshua Tree a popular place to camp. With 792,510 acres, four visitors and nine campgrounds there are days of exploration to be had. We did some recon for sites large enough for the Roadhouse but like most national parks, big rigs like ours have a harder time finding a site that will accommodate length beyond 35 feet. 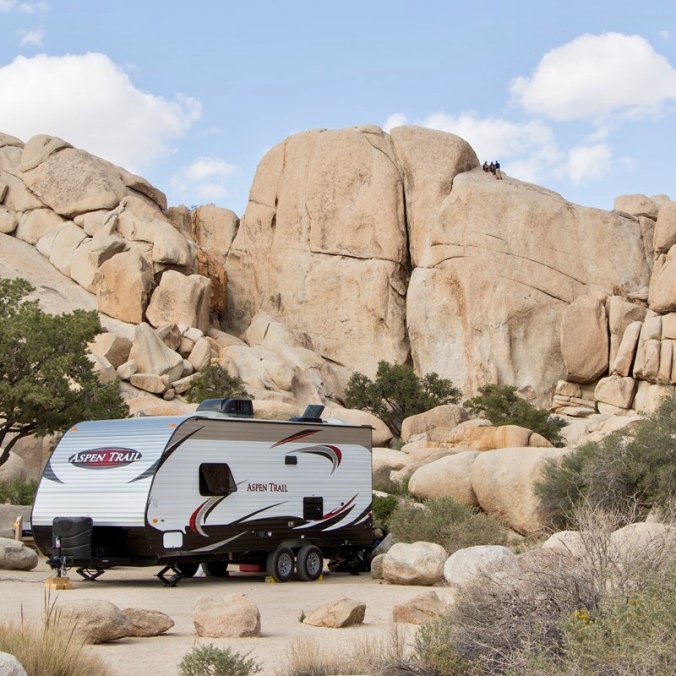 The campsites at Hidden Valley are nestled in-between the jumbo boulders.

Camping at Joshua Tree is primitive. No water, so bring plenty with you.

There are also many great picnic areas scattered all around this section of the park. We found a great lunch spot at one of the picnic areas near Jumbo Rocks. 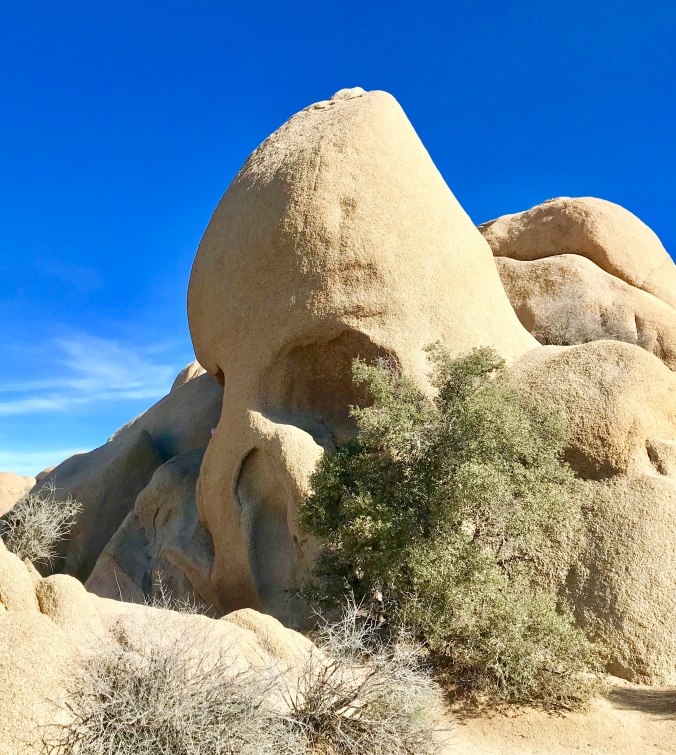 Skull Rock…I think it looks like a gorilla head!

We spent most of our day in the northwest section of the park doing short hikes and taking in all the natural beauty. We started the day by driving from Palm Springs to the Cottonwood Visitors Center. From there we worked our way up to Keys View stopping at the Cholla Gardens and a few other areas along the way. 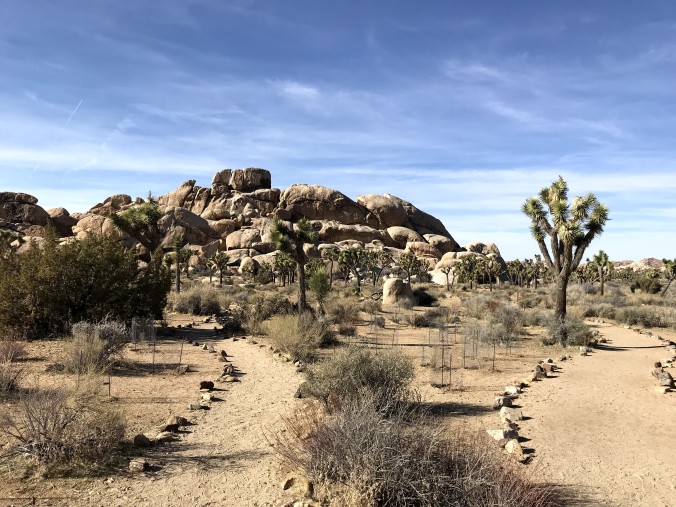 The Discovery Trail was designed by students and includes 10 features of interest for kids. 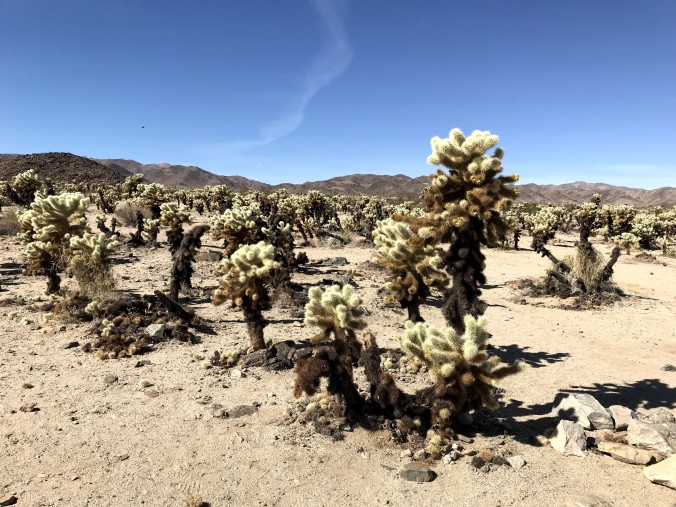 Barker Dam is listed on the National Register of Historic Places and the 1.3 mike hike was my favorite of the day.  The area is just stunning and the water there made it feel like a real oasis in the desert.

A true oasis in the desert…no camels but there were some ducks floating around.

The dam was originally constructed by the Barker and Shay cattle company in 1902 and was added to several times by William “Bill” Keys, a homesteader and local legend. The dam serves as a tangible reminder of the tenacity and ingenuity of homesteaders struggling to survive in the extreme deserts of the American Southwest. Rusted metal pipes scavenged from abandoned mines protrude from the top of the masonry and concrete dam that catches and holds seasonal precipitation. No springs exist in the area, so catchments such as Barker Dam were vitally important for ranchers and homesteaders trying to settle the desert.

Sadly, this historical dam has suffered serious vandalism and in 2015 the area around the dam was closed off to the public. REALLY, what the hell is wrong with people – when I read about things like this happening in such areas of beauty I really lose faith in humans. We are fast becoming a failed species. 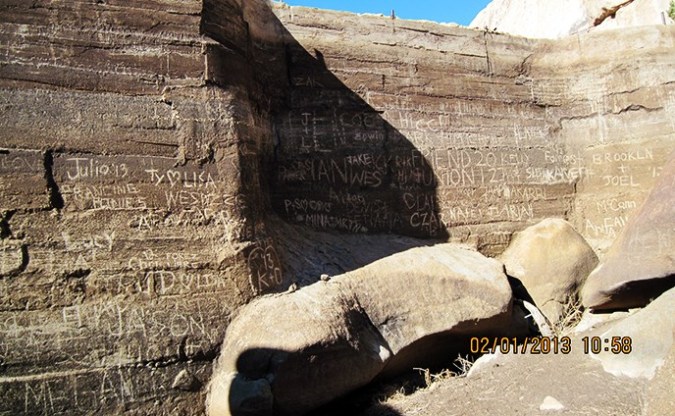 So unbelievable that people would do this. Photo courtesy of the NPS.

Thankfully, the NPS partnered with the University of New Mexico who helped the Joshua Tree National Park develop a method of mitigating the scratched graffiti at Barker Dam.  The year and a half partnership culminated with a weeklong project where architectural conservators from the University of New Mexico volunteered their skills to effectively cover the visual impacts of scratched graffiti from the entire surface of the dam. Okay, my faith in humans is slightly restored! 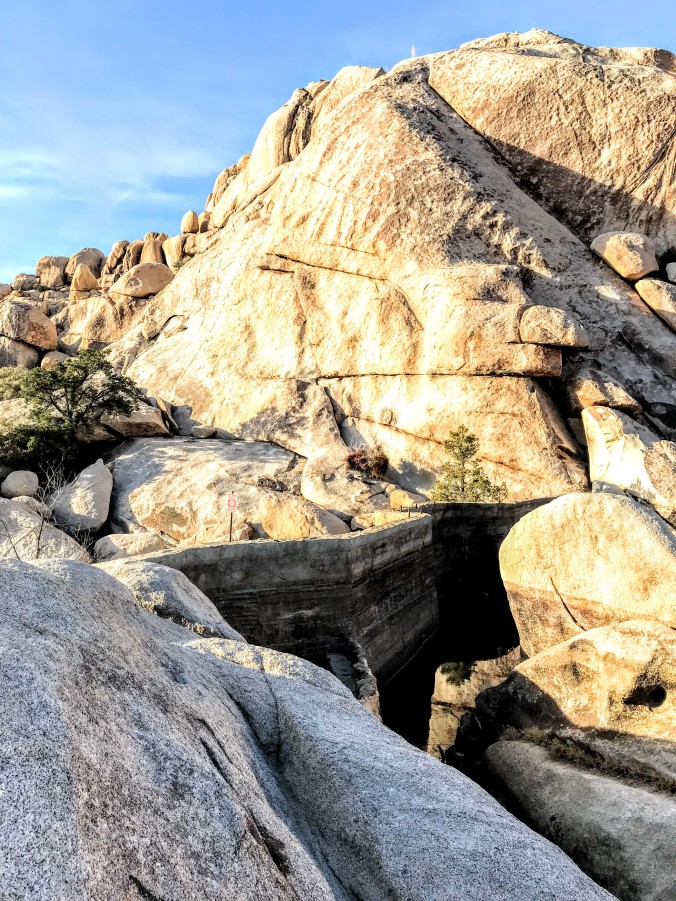 Bill Keys and the Desert Queen Ranch are quite a story. Unfortunately, we didn’t have time for the tour but it is on my list of things to do when we make another visit to the park. So, I promise a follow up to this at a later date!

Unlike the many rolling hills of sand found at other parts of Joshua Tree, Hidden Valley is composed mostly of large boulders and countless rock making it one of the most popular destinations in the park for rock climbers. That, and the fact that there is a campground just across the road with just nine super cool sites tucked back in the big boulders make this a popular place. So listen up avid campers, if you haven’t camped at Joshua Tree National Park, you should put it on your bucket list. 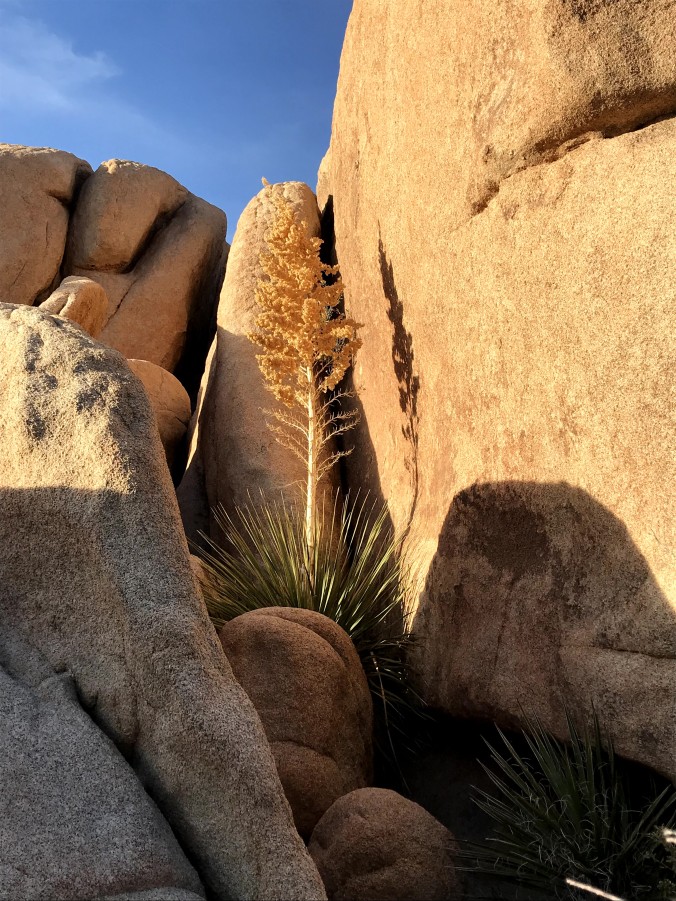 This yucca has the perfect location tucked in next to the boulders. The roots will seek moisture from under the boulders which will help it survive – aren’t plants clever!

No climbing for us, instead we stuck to the trail and enjoyed the short walking/hiking trail around Hidden Valley. I can see why climbers love this area – the massive rocks ringing part of the valley are just spectacular. For non-climbers, Hidden Valley is one of the easiest trails in the park, despite the difficulty of rock climbing here. You can take in the rocks scaling to 4,200 feet at their highest point and the climbers climbing on them, all while hiking a loop trail that is just over a mile. 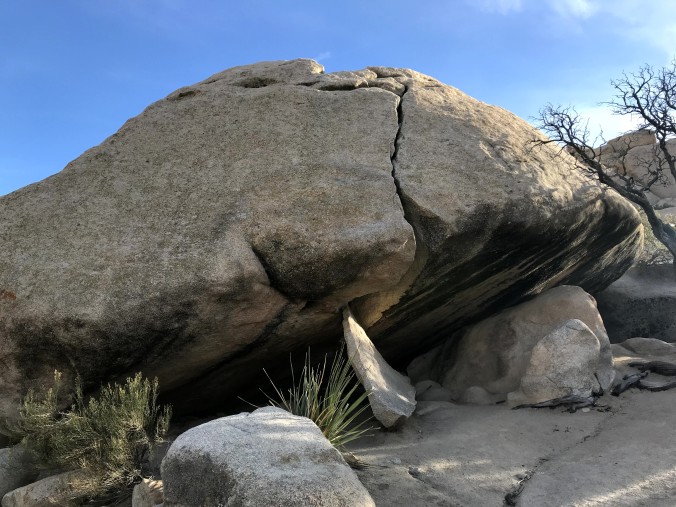 Is that sliver of rock really holding the boulder up?

Hidden Valley has some interesting history too. Back in the 1870s a pair of brothers, Bill and Jim McHaney and their band of cowboys known as the McHaney Gang were known for stealing cattle and horses and hiding them between the rocks at Hidden Valley. They rebranded the cattle there, with 55-acres to do so. At the time, the herds had abundant amounts of grass to feed on, as it covered most of the valley’s floor.

After the herds were rebranded, they were sold off in other states. At one time a successful business, by the end of the 19th century, many cattlemen and miners had moved into the region and quickly it became too risky a business.

Our day in Joshua Tree came to an end all too soon and as dusk descended on the park, it was time to head back to Palm Springs. Good thing it is such an easy day trip from the Palm Springs area because we need several more days to explore the many parts of the park we didn’t get to.

Our final gift from Mother Nature was this incredible sunset on the drive back to Palm Springs. 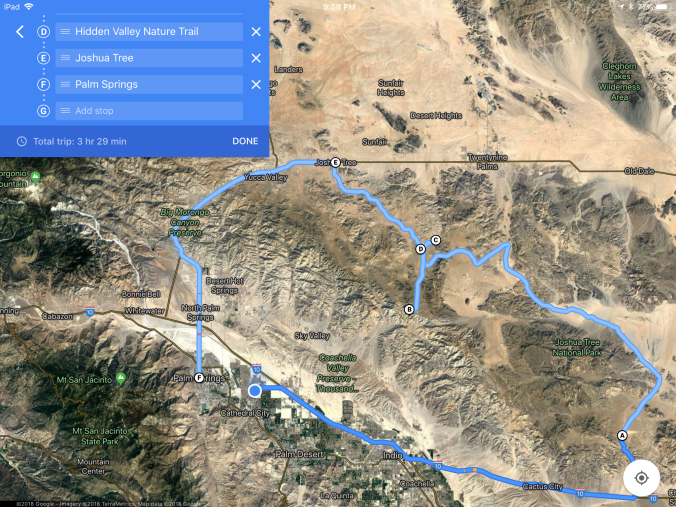