It is believed the first people to explore what is now Zion National Park entered the canyon looking for food. Thousands of years later more than 4 million people come from around the world to feed more than their bodies. Most visitors today come to nourish their souls by some mystic power that these towering red rocks walls hold. 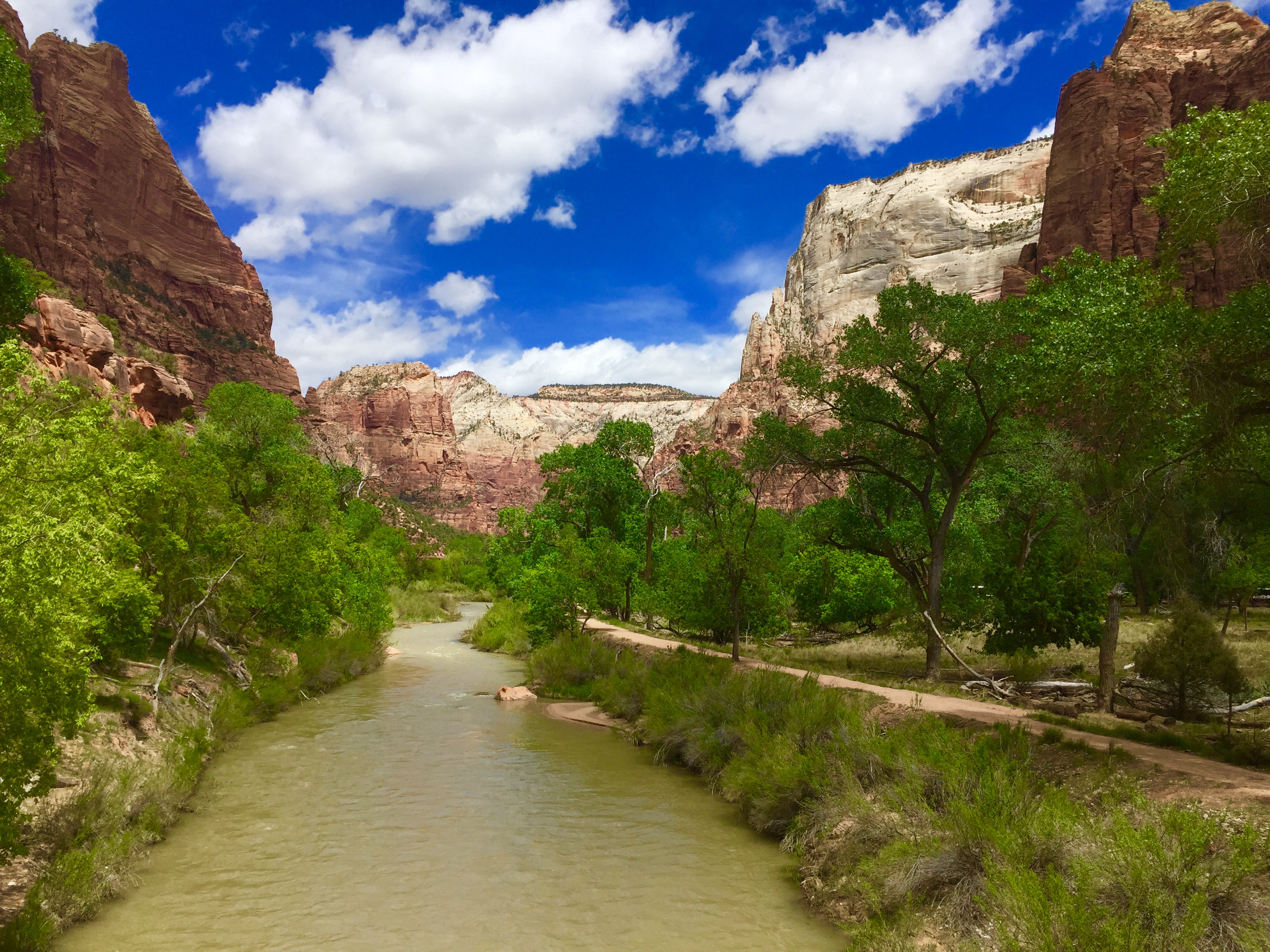 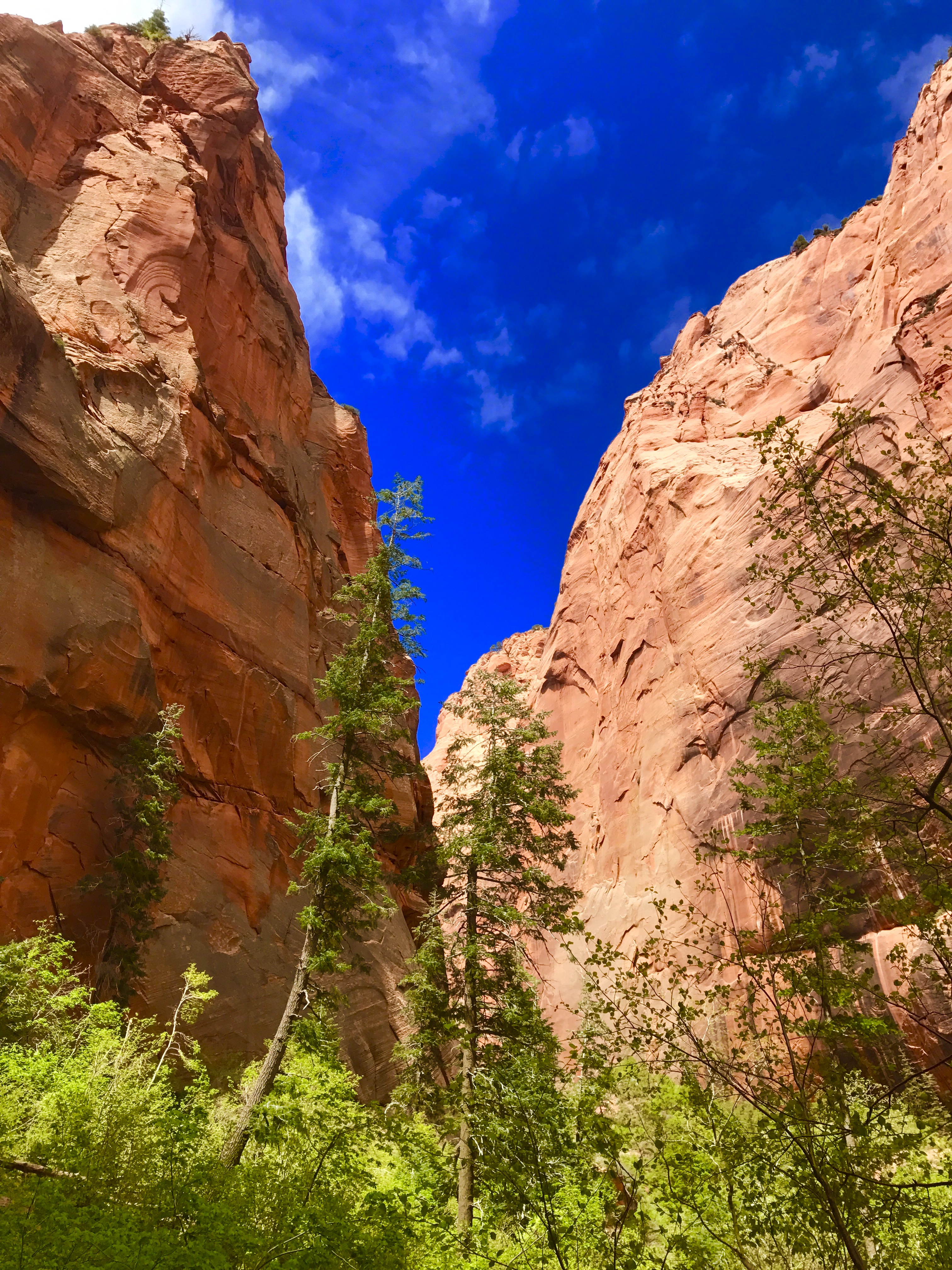 Zion National Park and its 229 square miles of towering cliff walls, narrow canyons and absolutely stunning scenery lie about 300 miles from Salt Lake City and 160 miles from Las Vegas, making it an easy destination to reach from all over the world. The park was actually established in 1909 and named Mukuntuweap National Monument, Zion National Park was established in 1919; the Zion National Monument of the Kolob Canyons area was proclaimed in 1937 and added to the park’s boundaries in 1956. One could easily spend a weeks in this area, I wish we had stayed at least two weeks. 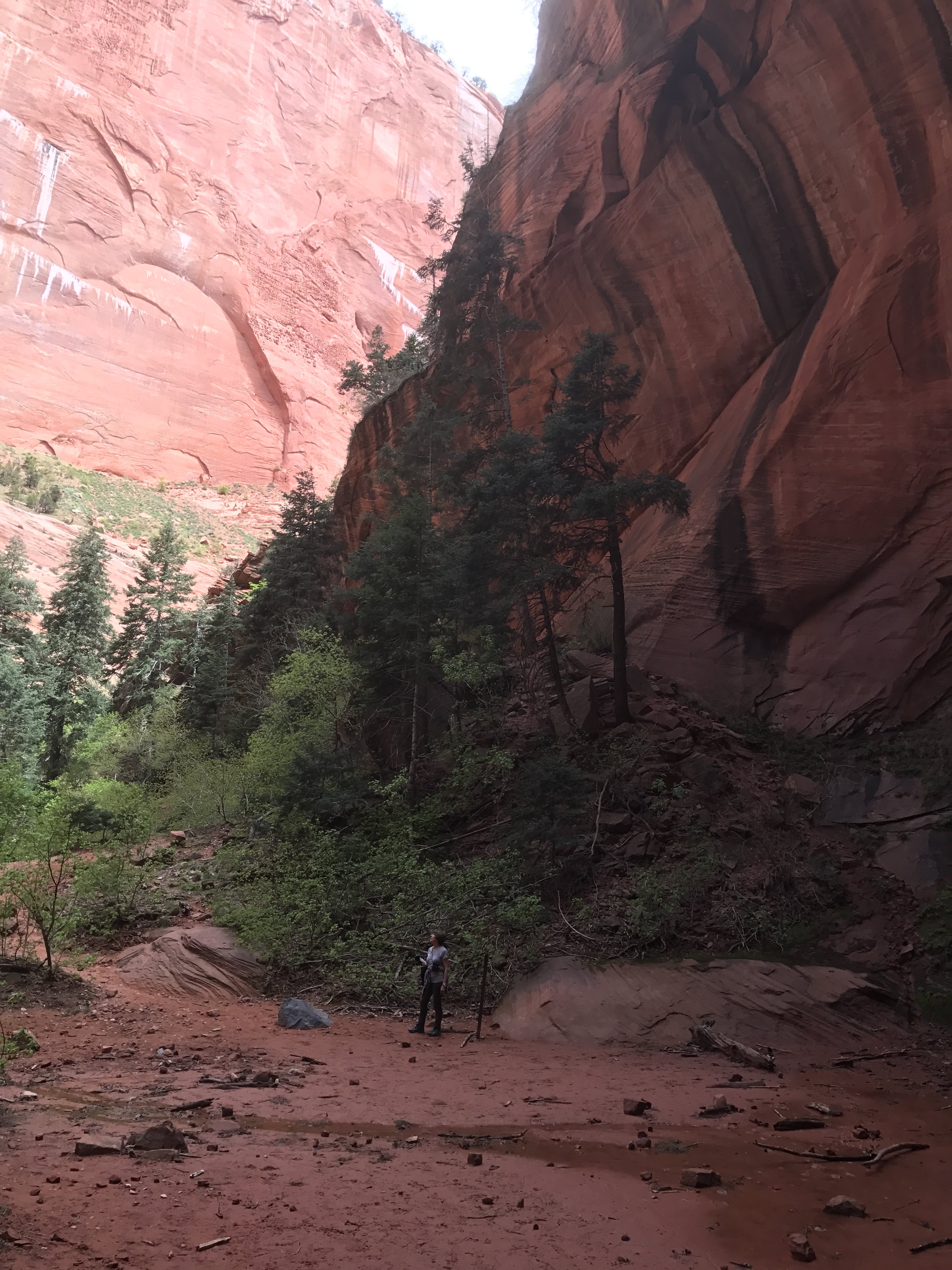 When Zion National Park was still Mukuntuweap National Monument, 1,000 people visited in 1915 and in 2016 over 4 million people visited the park. This makes Zion is one of the most popular national parks in the country and while is was busy during our visit in late April, the summer months can see crushing numbers of visitors so my advice would be to go in the shoulder seasons.  The well organized shuttle system helps control the chaos that would ensue if visitors were still able to just drive in. The shuttle system operates seasonally each year from the spring through the fall. 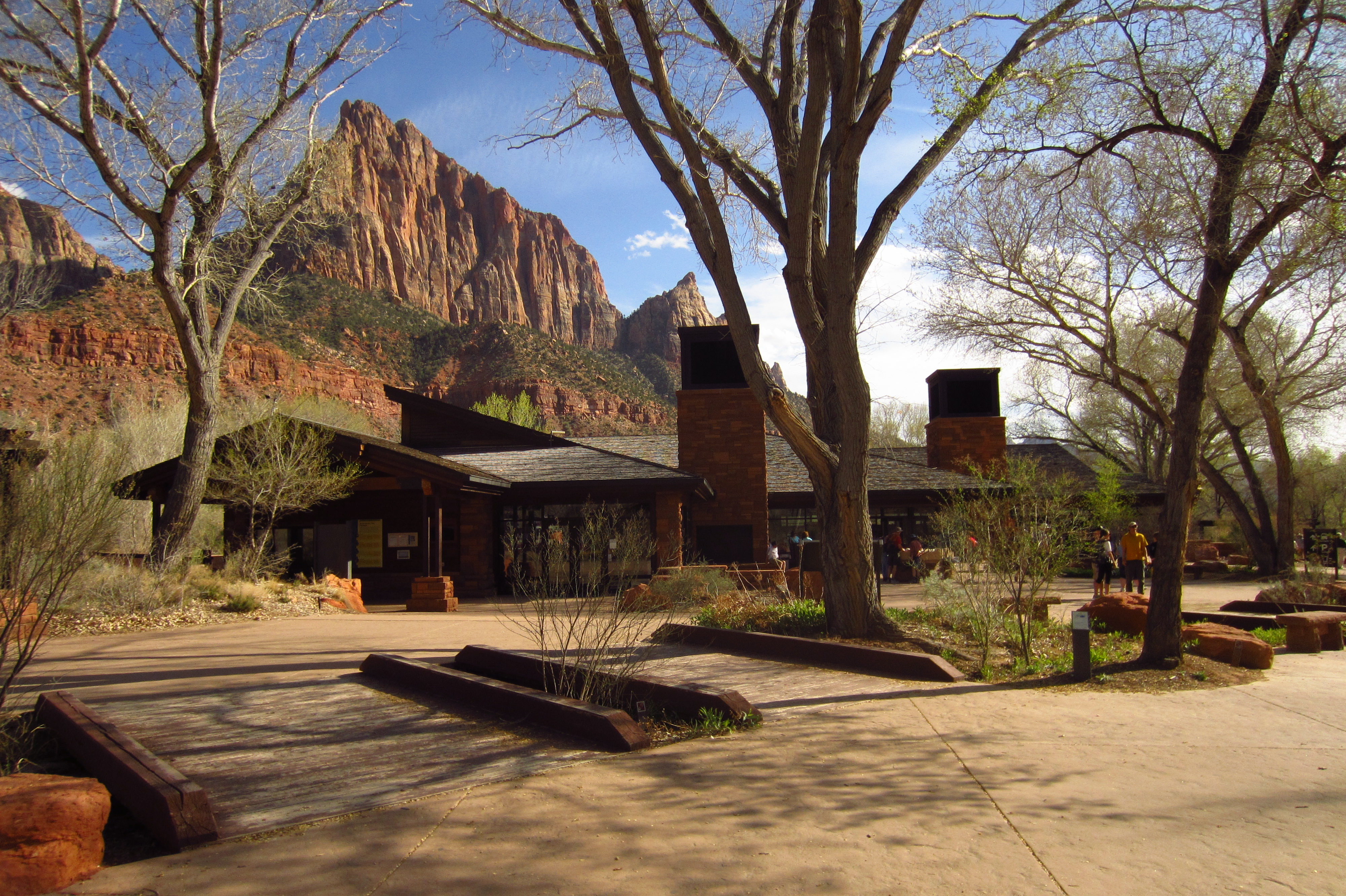 Get the most out of your time in Zion by doing some homework and figuring out what you wantb to see and do while visiting the park. Our first stop was at the Visitors Center where we chatted with a Park Ranger who was happy to answer our questions and generally delighted that we had a week to explore the area. Many people rush through these national parks in a day and truly don’t stop long enough to really absorb all the beautiful secrets they hold. Seriously, there is a sign at the visitors center explaining what to do if you only have three hours at Zion. 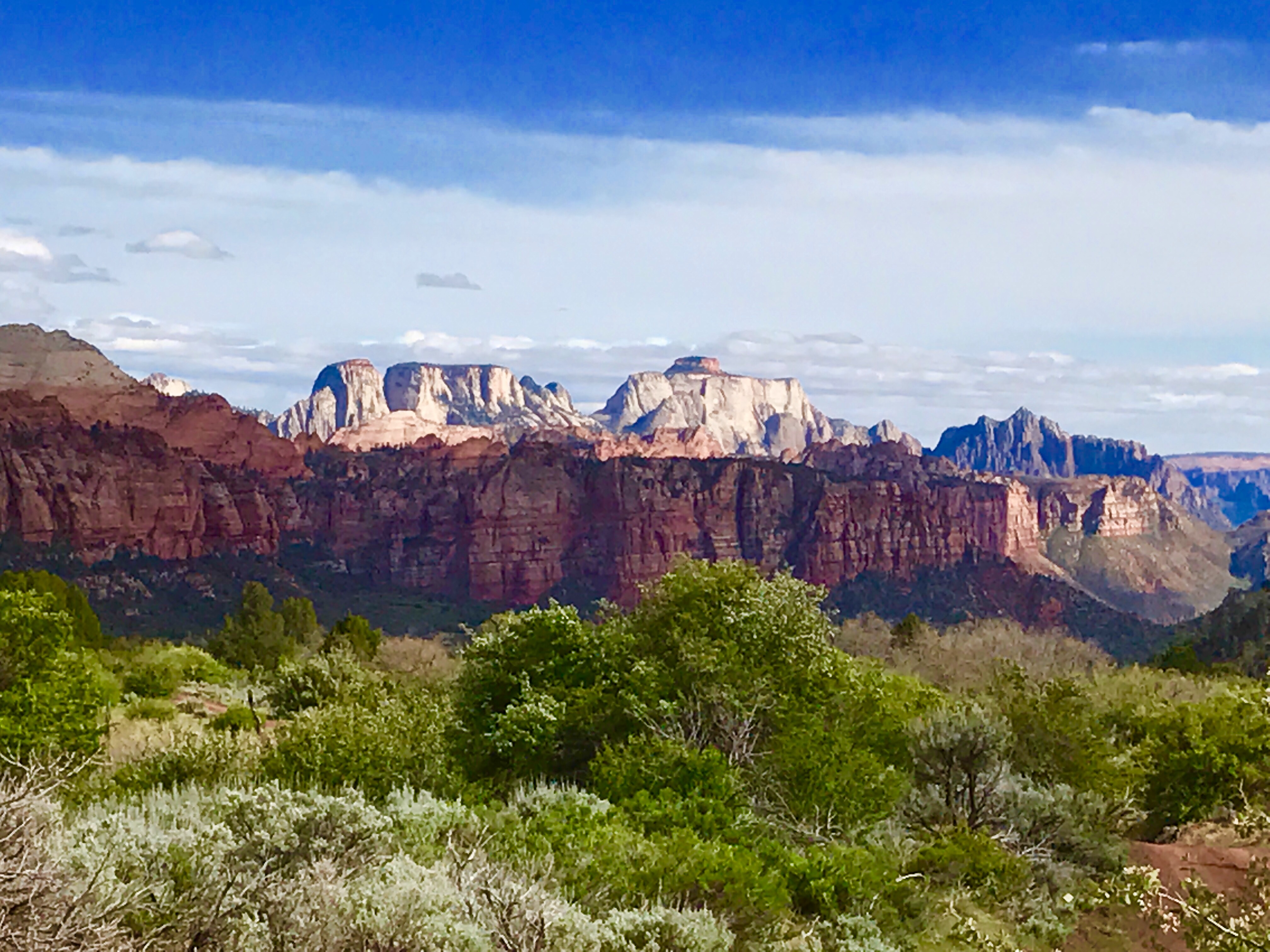 The small town of Springdale which is just outside the south entrance of the park is loaded with great restaurants and lodging choices. There is also a great city shuttle which gets people to the park visitors center from 6 different stops along Hwy 9. We stayed at the Virgin River RV park which is about 6 miles from the park entrance and out of the fray of visitors. Our site backed up to the roaring Virgin River and while it was one of the busier, tighter places we stayed, it was a great base camp for visiting the area. Bentley was not a fan of this RV Park but he did enjoy a few days at the near by Doggie Dude Ranch. He came home one day with dirt up has nose and was happily exhausted!! 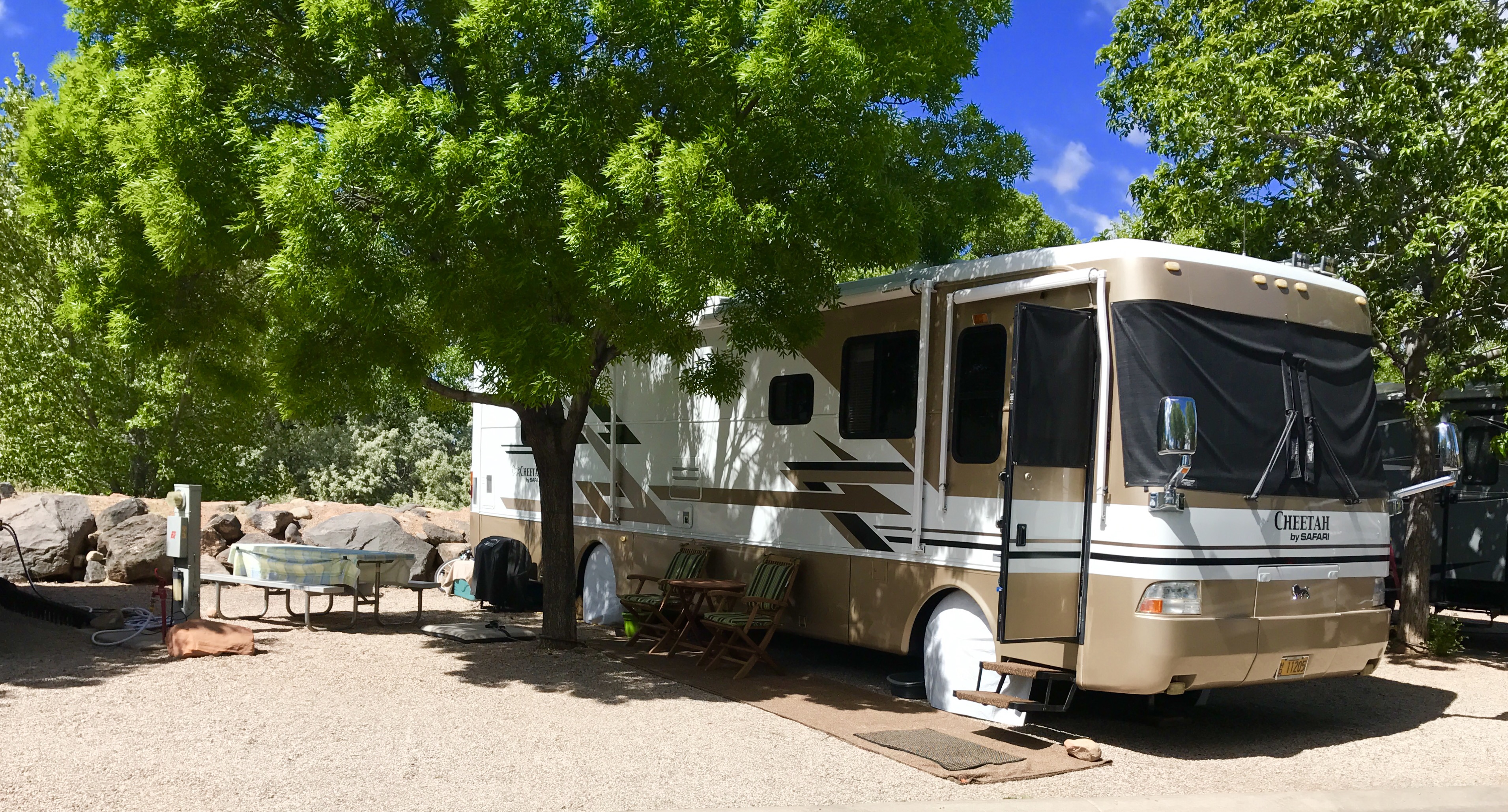 Our first order of business after stoppping at the visitors center was to take the 90 minute shuttle ride to the end of the canyon and back to get a feel for the area and what we wanted to do for the next week. Since we had friends joining us on this part of our adventure, we wanted to get the lay of the land so we could hit the ground running when they got there. 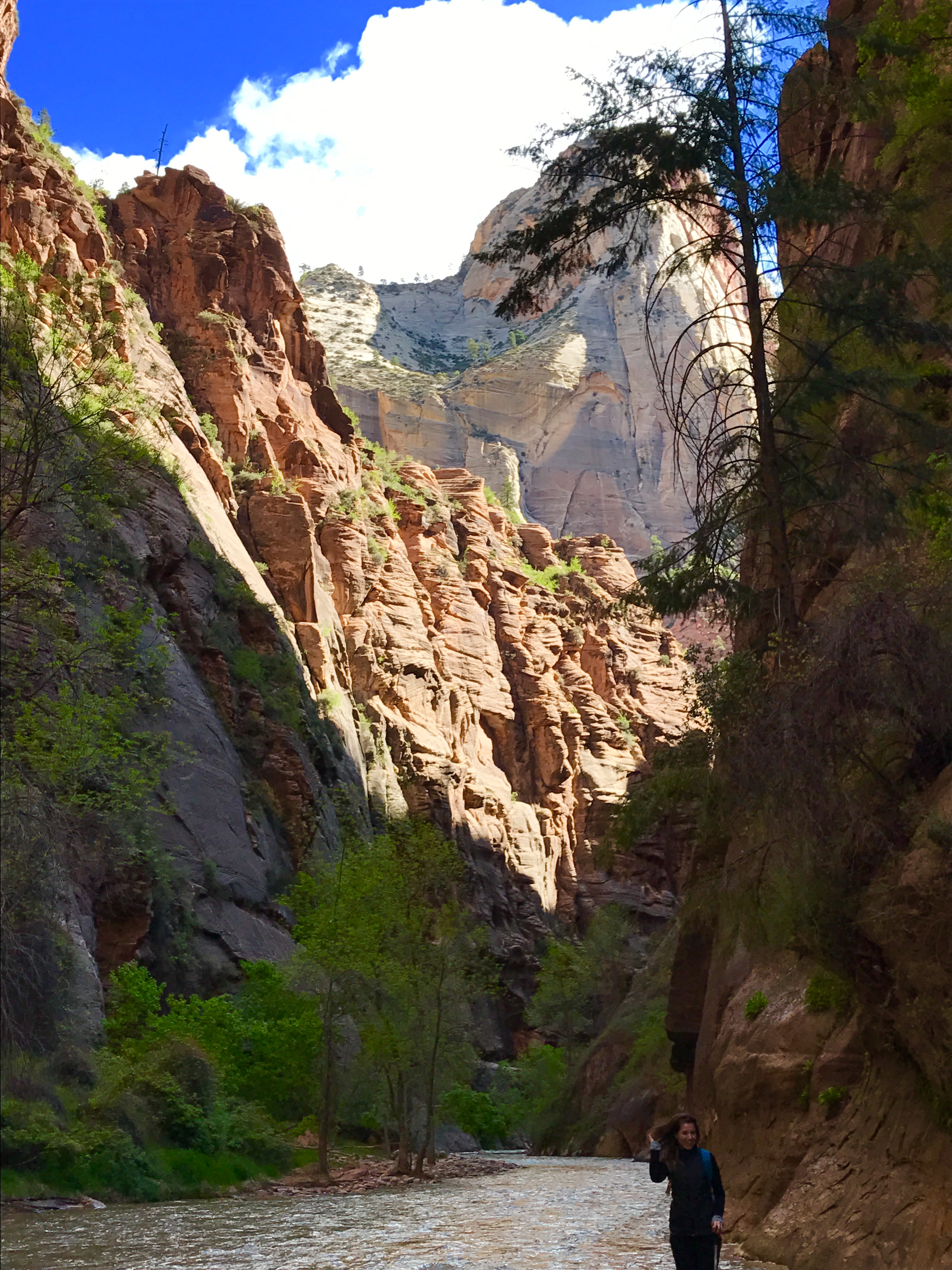 The scenery is OMG gorgeous and it was really hard not to get off the bus and explore further that day but we did come up with a game plan for the next 5 day days. Petal to the metal once our friends arrived, we checked out the park museum and movie, hiked the Weeping Rock Trail, the Narrows Trail, Upper and Lower Emerald Pools, had beers at the Zion Lodge, walked in the meadow below the Court of the Patriarchs and did the lower Virgin River Walk. 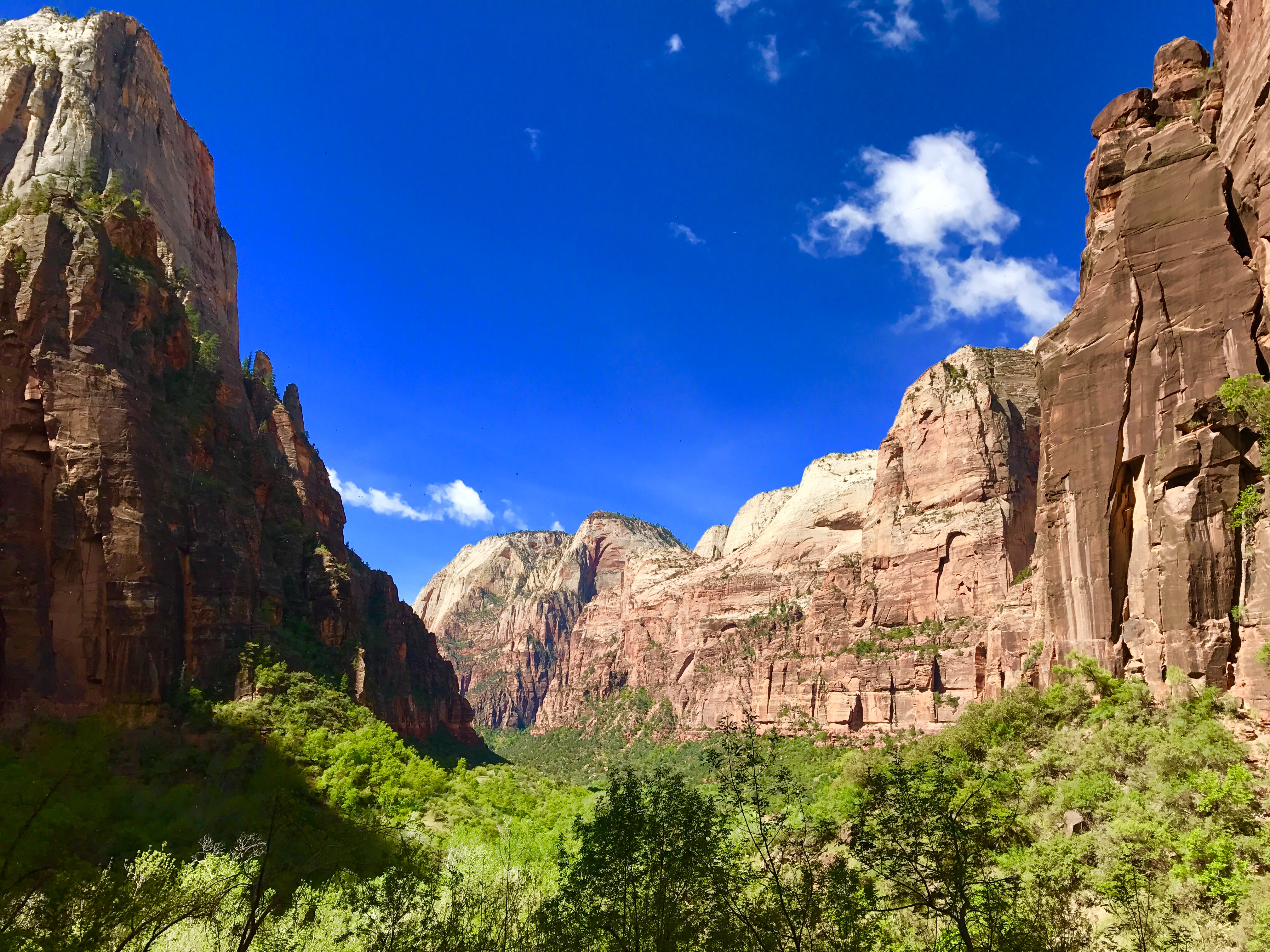 Another absolutely spectacular side trip is the ten-mile drive from the Zion entrance to Mt. Carmel, where it hooks up with Federal Hwy. 89. So glad we opted NOT to do this drive in the Road House when we came over from Bryce.  The twisting, hairpin roads, switchbacks, slickrock and sweeping views with seasonal waterfalls would not have been fully enjoyed by either the navigator or the driver. 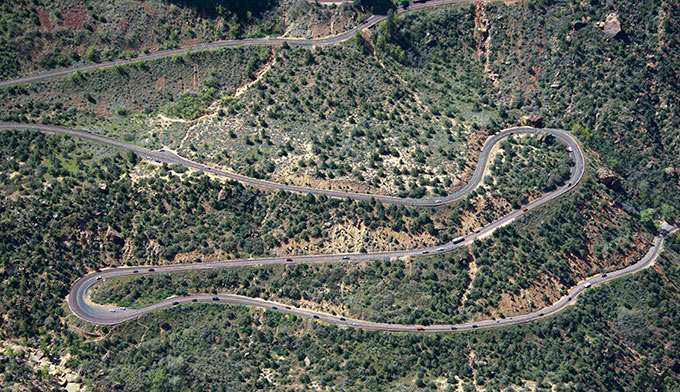 There are numerous spots where you can pull off the road in a smaller vehicle for a better view or to take a short hike which will give you a more up close experience with many of the highlights seen along this amazing stretch of road.

The man-made feature that draws attention is the 1.1-mile-long Zion-Mount Carmel Tunnel, which was carved through a sandstone cliff as part of the Zion-Mount Carmel Highway project. Constructed between 1927 and 1930 to ease travel between Zion, Bryce and Grand Canyon national parks, a route known as the “Grand Circle Tour.” 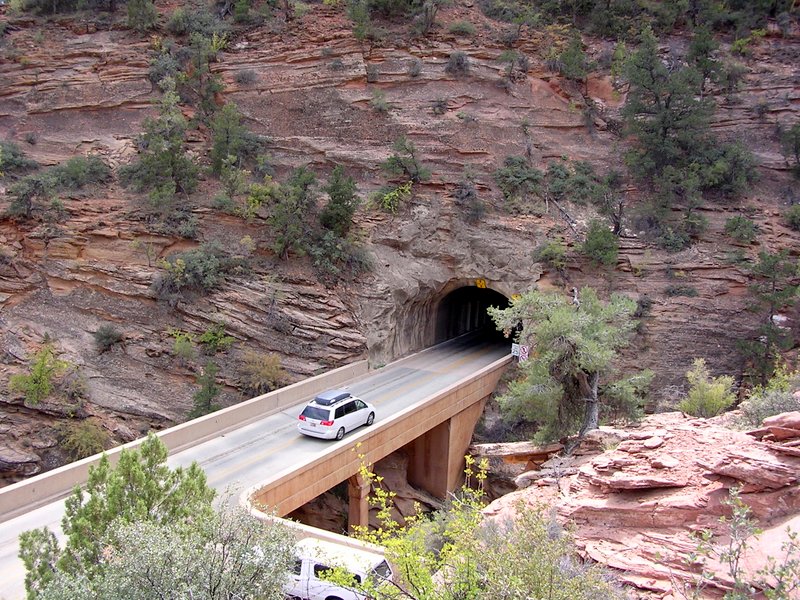 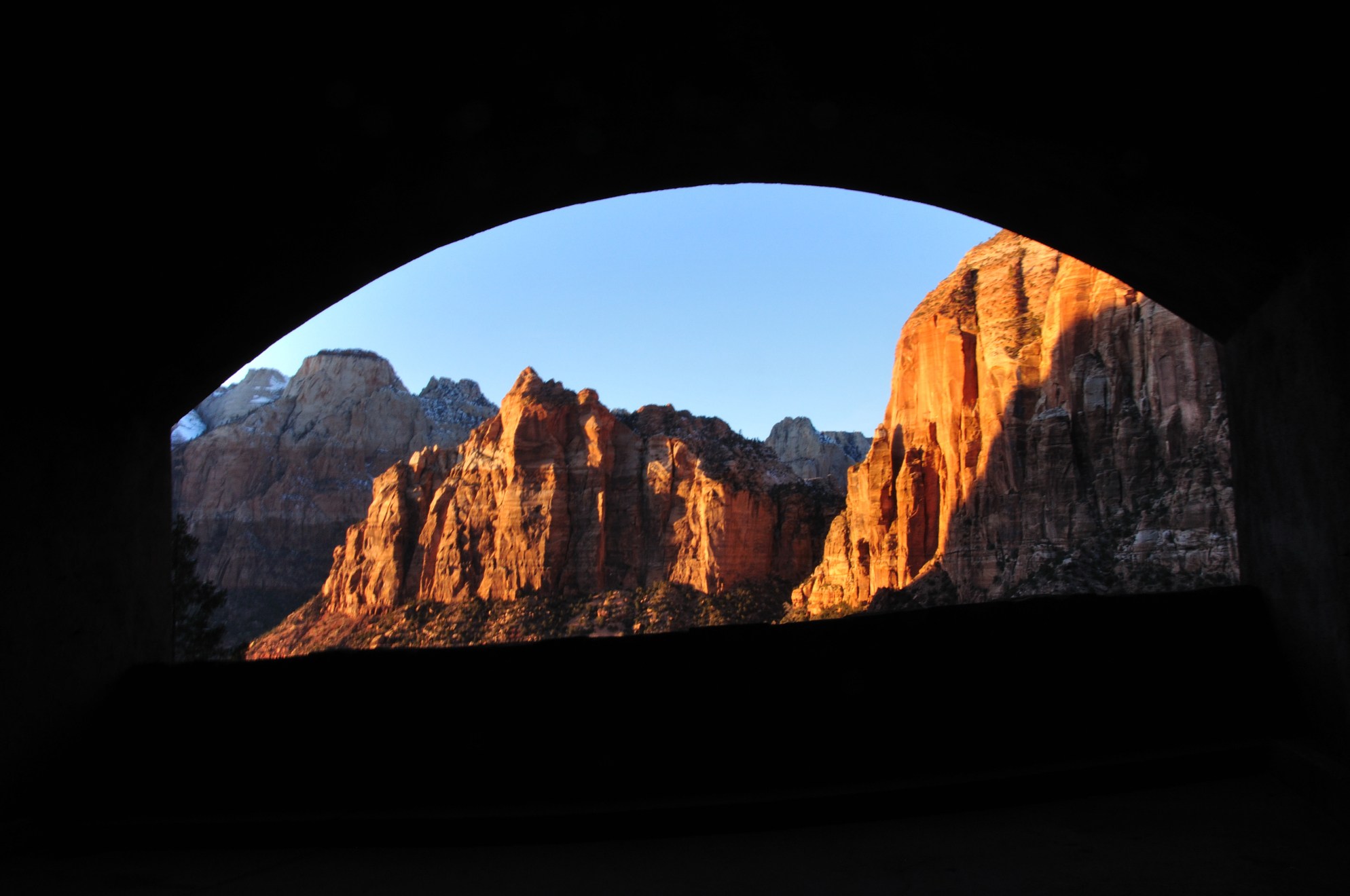 This area is a geological wonder, domes of slickrock, hoodoos along the way that look like giant mud people and the Checkerboard Mesa on the south side of the road at the eastern boundary of the park along Hwy. 9 will have you gaping in wonder. Eons of freezing and thawing created vertical cracks, while erosion by wind and rain accentuated the horizontal bedding planes of this distinctive petrified Navajo sandstone mountain so that over time a pattern of irregular crosshatches emerged, creating the checkerboard effect. 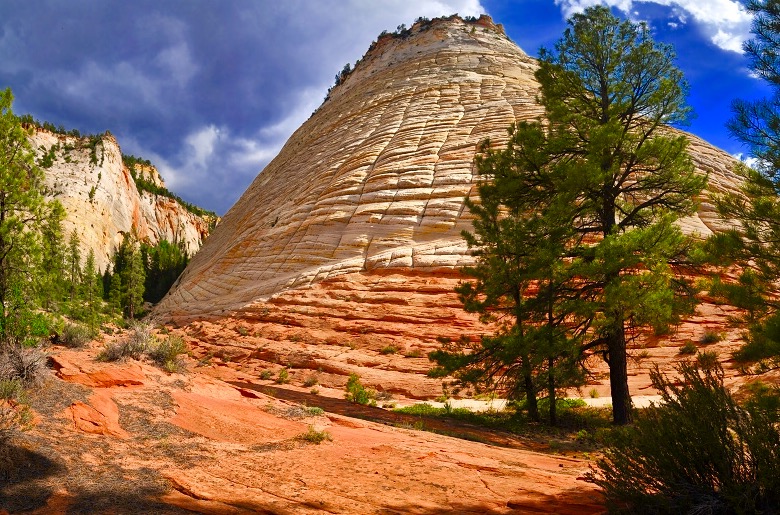 Our week with friends flew, hiking the many trails inside the park, exploring Kolob Canyon in the northern part of the park, a day trip to Kanab and Bryce Canyon all kept us busy and happily exhausted at the end of each day. 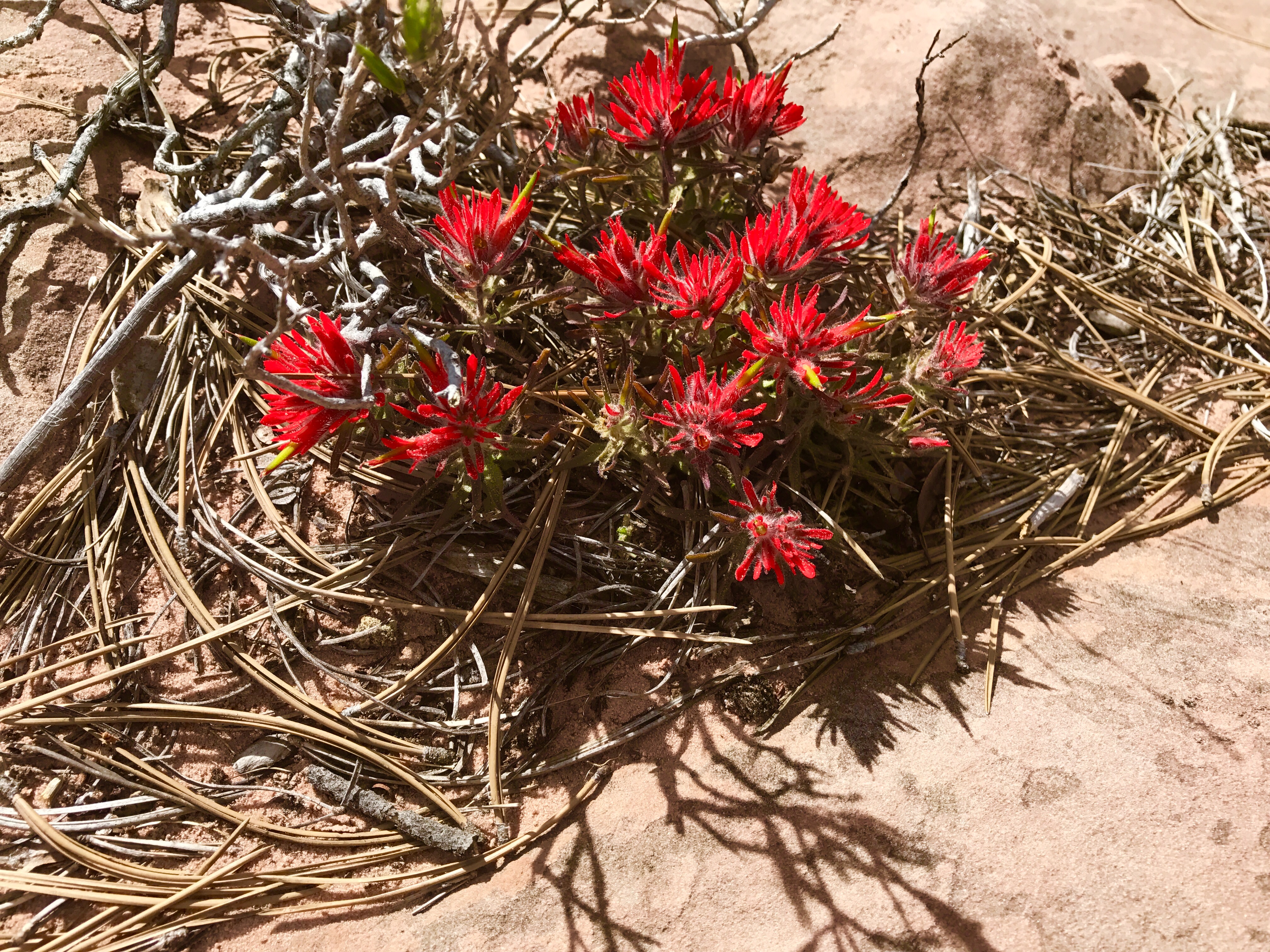 We are hoping to see more of Utah this fall when we make the migration south. 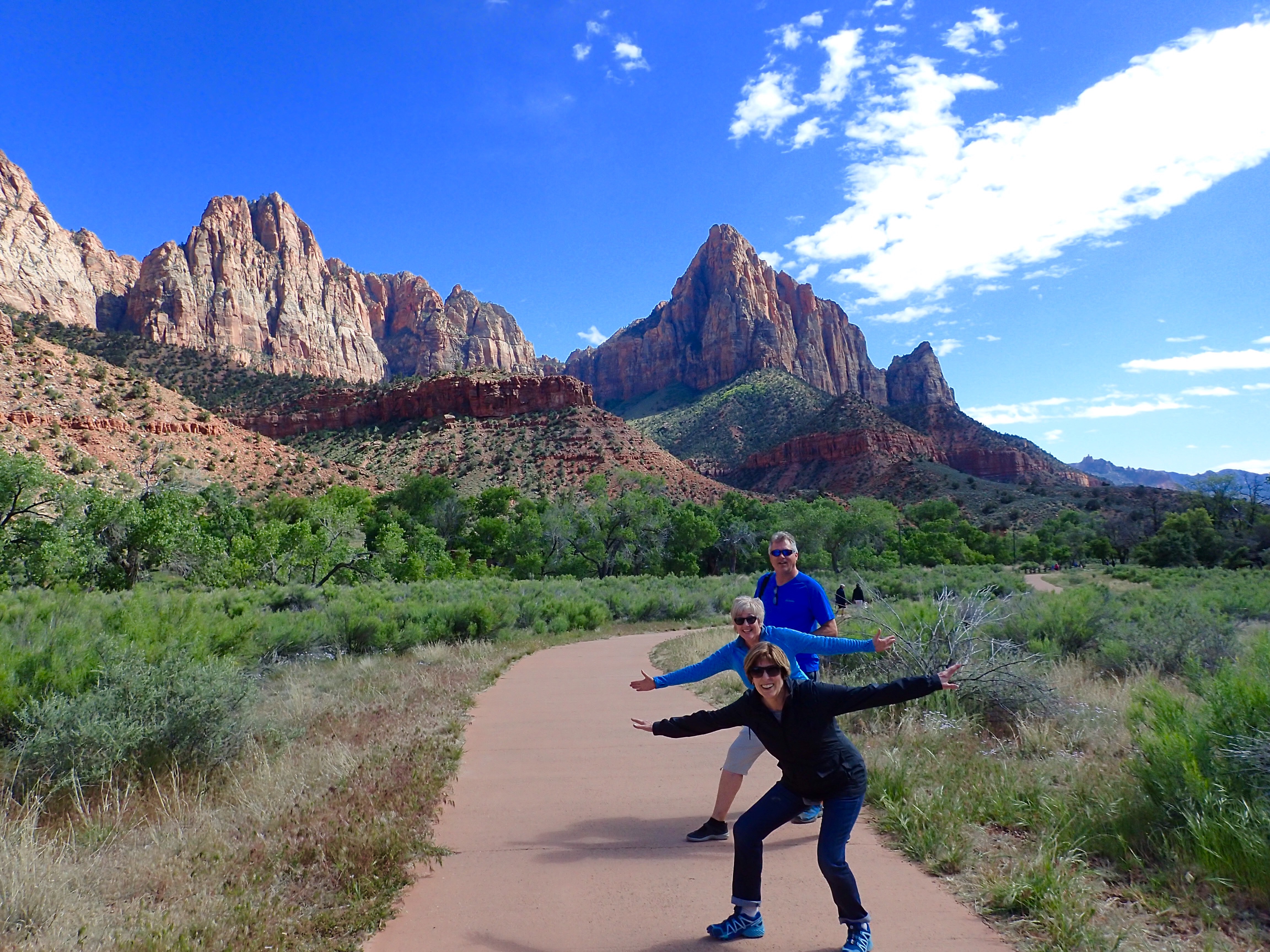