I love a good cup of coffee and thanks to a short stent as a coffee roaster when I lived in Southern California, I am a bit of a coffee snob. Over the years, I have done some exploration of the kona coffee growing area and quite frankly my initial impressions from when I was roasting “what’s all the hype” were still unanswered.

Not one to give up, Wally and I did another trip up the slopes of the south side of Kona in search of a great cup of coffee. What did we find…Heavenly Hawaiian Farm. Yep, that’s the name of the farm and the cup of fresh brewed kona coffee lived up to the name.

We had the pleasure of meeting the farm owners, Dave and Trudy Bateman. Dave gives a heck of a tour, his farm is stunningly beautiful, meticulously cultivated and the pickers were happily picking ripe red coffee cherries by hand while they sang. What I learned after spending a few hours with him is that kona coffee, like wine can be complex in flavor and is truly a labor intensive commodity to produce.

Most farms are hand picking the beans from late August to late January and since the cherries do not ripen at the same time, each tree will be picked several times throughout the season. Hand-picking is a meticulous process than insures that only cherries at peak maturity are harvested. 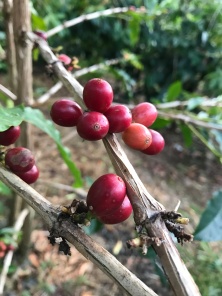 Because the cherries must be processed within 24 hours of harvest, at Heavenly Hawaiian Farm, they are were singularly focused on bringing in the ripe red coffee cherry and starting the the wet milling process which strips the pulp off the bean. We toured the covered, open air drying floors where the beans were being dried to parchment and saw the huge mechanical dryers that help speed up the drying process at Heavenly Hawaiian Farms. 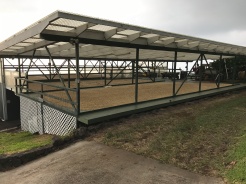 Next, the parchment is sent to a local dry mill where the parchment and inner silver skin are removed from the green bean. The beans are then sorted by size and defects (graded) and bagged for final evaluation and certification by the State of Hawaii Department of Agriculture. Ag representatives take samples to their lab where they closely scrutinize the beans to look for defects such as discoloration,cleanliness, mildew, moisture content, CBB damage, nicks and broken beans. They also cup the coffee to test for aroma and flavor. The Ag inspectors then certify each bag of green bean as to grade. The state certification is not required by law, but strongly recommended, for the farmer or processor to sell the green beans outside the Kona District. Only beans grown in the Kona District can be sold as Kona coffee. State certification guarantees you are getting legitimate Kona coffee.

Kona region contains approximately 600 independent coffee farms. Most are small, usually three to seven acres in size. Traditionally, as with most farms, they are a family concern. In 1997 the total Kona coffee acreage was 2290 acres and green coffee production just over two million pounds. Kona Coffee production represents less than 1% of the worldwide production of coffee and is arguably one of the most expensive coffees in the world.

After touring the farm with Dave, I can understand and appreciate why that is. Not only did I finally get my question about kona coffee answered, Trudy sent me home with a bag of ripe guava’s and avocado’s, which we picked right off the trees.

If your looking for a great cup of kona coffee or a unique place to stay on your next trip to the Big Island, check out the Heavenly Hawaiian Farm website at http://heavenlyhawaiian.com. Tell Dave and Trudy hello for me too!! 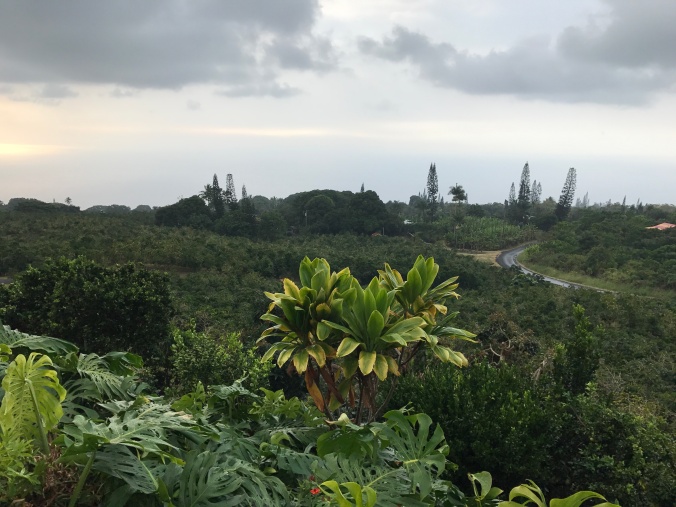