We have been on the go the last since we arrived in Gold Canyon Arizona on March 2nd so I haven’t really had time to sit down to write a blog post. My bad…but I will try to redeem myself.

Dinners out with friends, happy hour get togethers, cooking dinner for friends, playing pickle ball, hiking in the Superstition Mountains, concerts and having friends visit from out of town have filled our days to capacity. No complaints from these two retired people but looking forward to a few sleep-in days!!!

The Handlebar Pub and Grill in Apache Junction, know as AJ by the locals is one of those places you might just drive by and not notice. If you do notice it, you might still just drive by because it doesn’t look like much from the road. 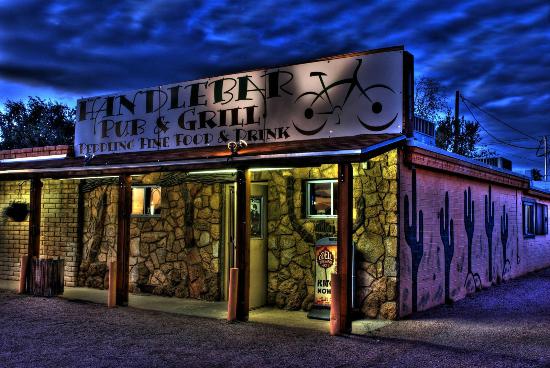 The inside is a bit dive bar-ish in a good way but the outdoor patio is the place to be. Live music most nights…actually good live music and a great selection of beer on tap. This place isn’t going to win any James Beard Awards but the food is good and the Green Chili Cheeseburger is one of my favorite things on the menu. 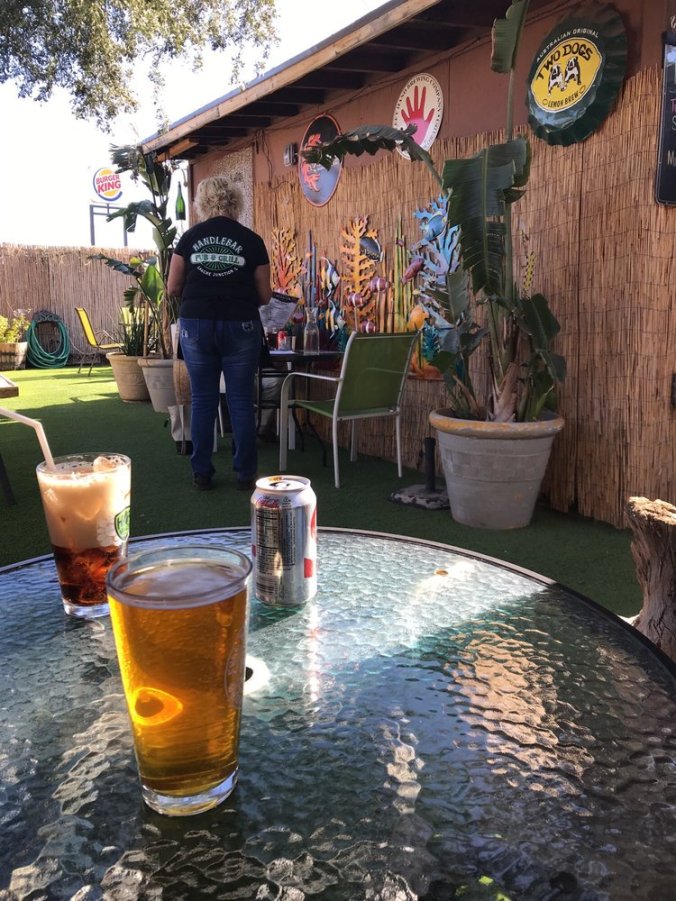 The patio has a funky, cool vibe.

We decided this is the place to go when you roll into town and need something simple and easy that is prepared by someone else – no dishes to do afterwards either!!! Seems we are not the only ones who like the Handlebar as it is full with a waiting list almost every night.

We have gone on several hikes the last two weeks. The hiking options in the Superstition Mountain Wilderness which are just out our back door in Gold Canyon are abundant. Many people think that Arizona is a big, flat desert but that is so WRONG!!! The Superstitions are one of many mountain ranges and the elevation reaches up to 6,266 ft in the Supes’. 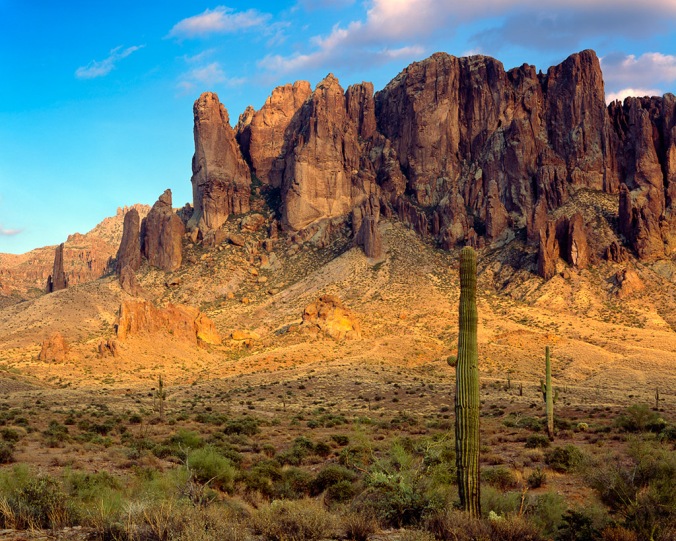 One of our favorite hikes is the Garden Valley Loop Trail which takes you through really interesting varied terrain on the 5.6 mile hike. On a wetter year (not this year) there is water in the creeks around the canyon making it a great place to stop for lunch and to bird watch. It is really a beautiful hike, lots of variety with canyons, vistas, creeks and mesas so we wanted to share it with our Portland friends Dave and Tanya during their recent visit. 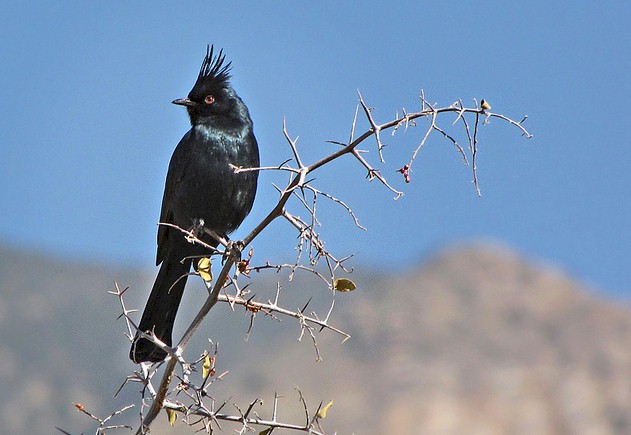 We did see one of these beauties on the drive out from the trailhead  – a Phainopepla, known as a Black Cardinal. Photo courtesy of the Arizona Bird Watcher. 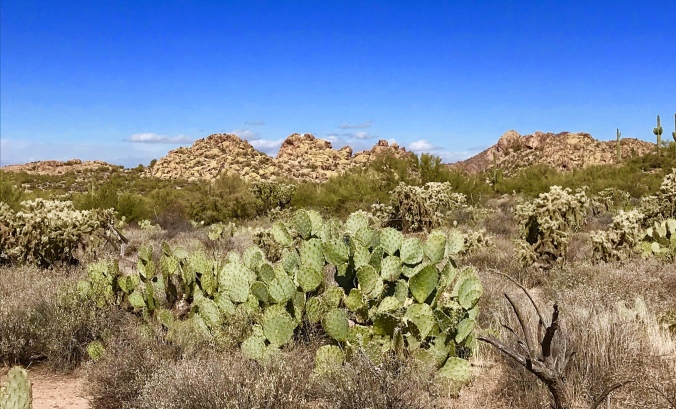 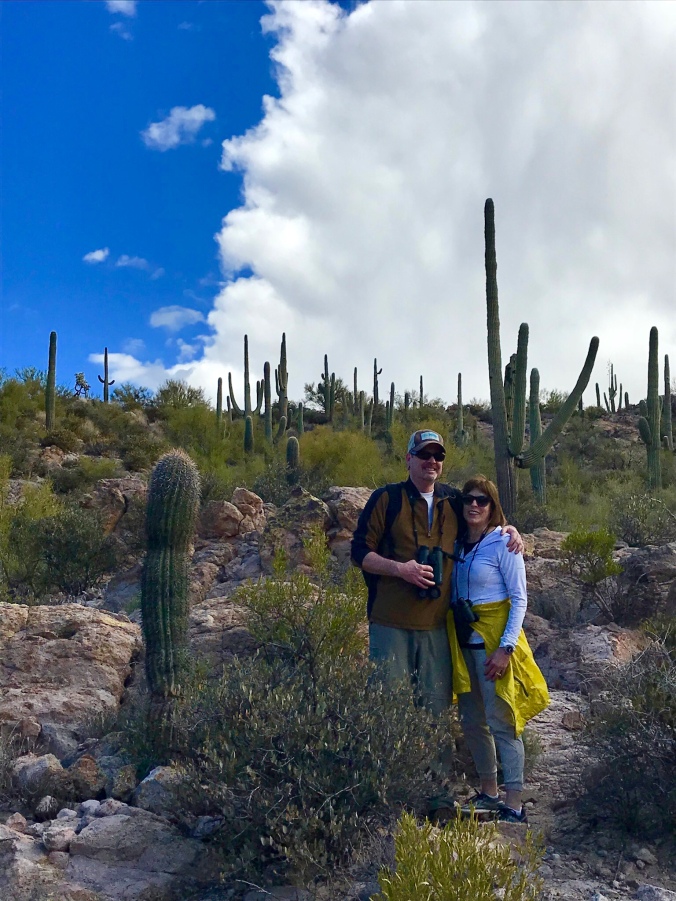 Loved having you here in Gold Canyon Dave and Tanya!!!!

Garden Valley was farmed by a small group of Hohokams probably some one thousand years ago when the climatic conditions were more favorable. It was cool to stand on the knoll above the valley where the old Indian grinding pots are still visible and imagine how their community worked and lived. 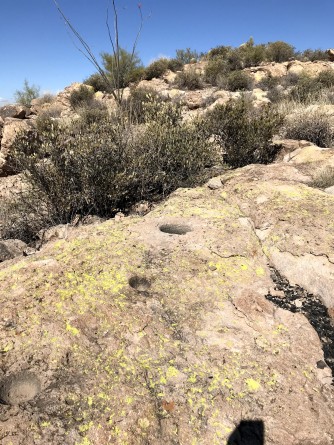 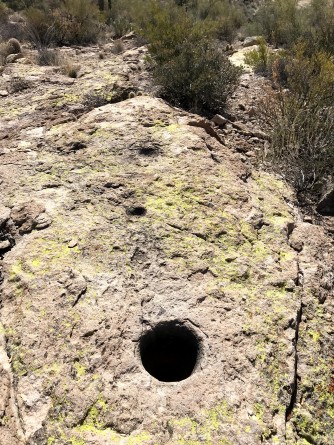 I did some research online about the Garden Valley area and found Tom Kollenborn’s great website that chronicles the history of the Superstition Mountains. It is thought that this large valley floor had more than 200 acres of usable farm land when there was a sufficient supply of water. Today mesquite and chain cholla have become the primary vegetation because the cattle growers over-grazed this area for the past century. The indian ruins and the cattle ranching may be long gone in Garden Valley but the history of its occupation can be traced back for centuries. 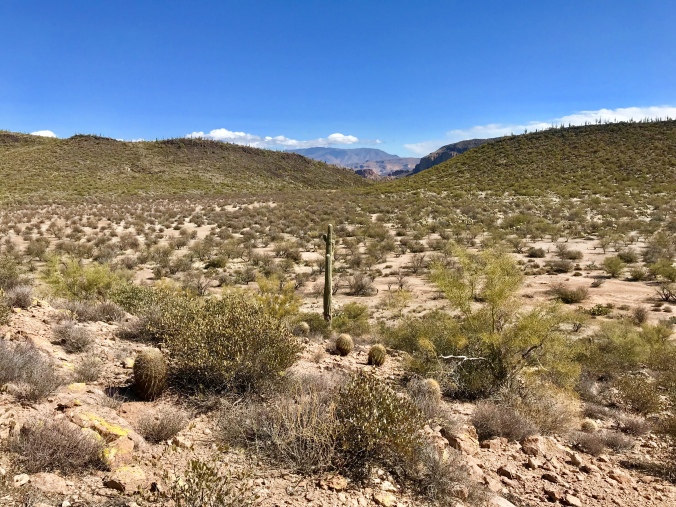 The Hohokam people lived around the Mesa area of Central Arizona for almost 1,500 years. They appeared around 1 CE and disappeared about 1450. Their agricultural society flourished around the middle Gila River and Salt River. These sources allowed them to farm beans, squash, corn, and cotton. The Hohokam were skilled agrarian’s, managing the soil to replace lost nutrients. Additional food came from extensive gathering of wild plants, dry farming agave, and hunting deer and small animals.

At one time a ruin was located in the center of the valley. This structure probably housed twenty-five to thirty individuals, while small caves on the fringe of the valley contained other families. Prior to 1930, the valley floor was literally covered with stone tools used by the ancient inhabitants who cultivated this special parcel of land. 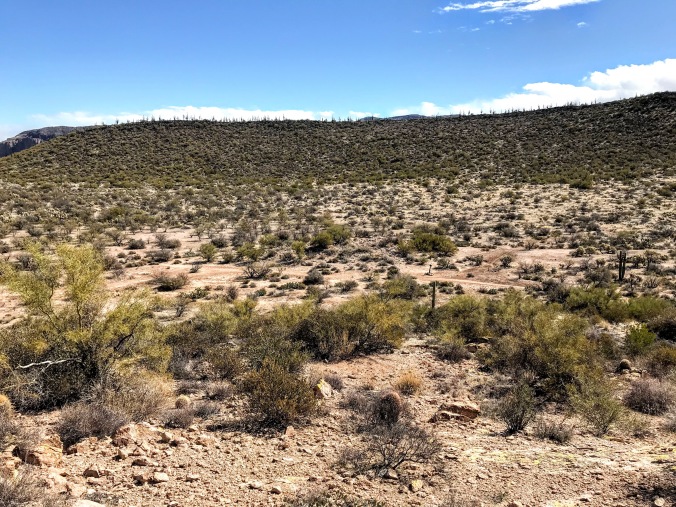 In the middle of this photo is a knoll where the ruins once stood.

The Apaches and Yavapais probably moved into these rugged mountains around 1500 A.D. The Apaches and Yavapais both constructed temporary rancherias or farmsteads in locations such as Garden Valley, Frog Tanks, Dismal Valley, Rock Tanks, Reavis Valley, along Tortilla Creek and many of the tributaries draining into the Salt River. 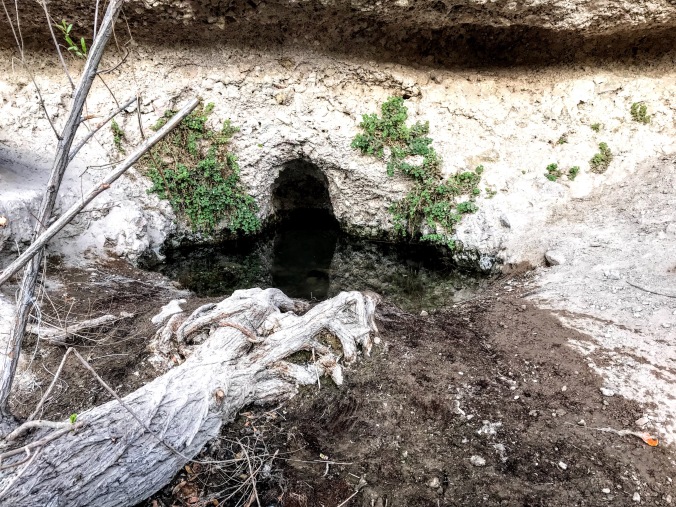 This is the only water we saw on the hike.

According to Tom Kollenborn’s website, in November of 1931, the Arizona Republican co-sponsored an archaeological expedition led by the City of Phoenix archaeologist Odds Halseth. The expedition selectively collected surface artifacts and documented their location before removal. The members of the archaeological expedition made a cursory inventory of surface artifacts they did not collect. Several hundred lithics were inventoried on the surface, recorded, and left in place. The lithics of Garden Valley were primarily indicative of the Hohokam culture. 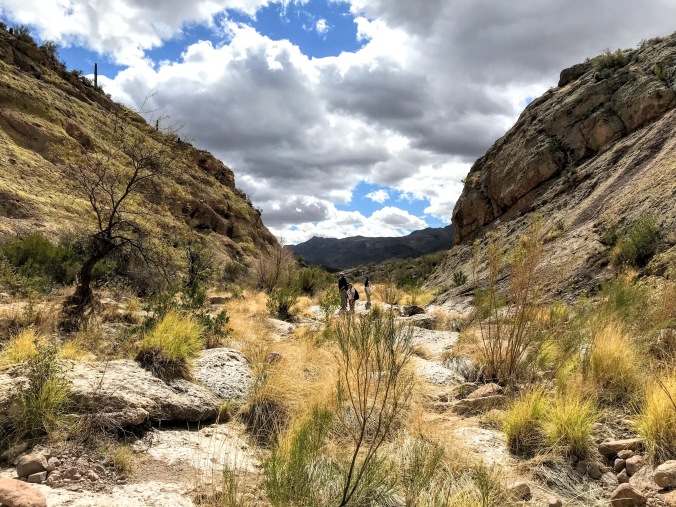 Last year these creek beds were filled with water and we saw way more birds.

Unfortunately, none of these lithics remain on the floor of Garden Valley today. They all have been taken by collectors over the years, however we did see pottery shards as well as the ancient grinding pots. 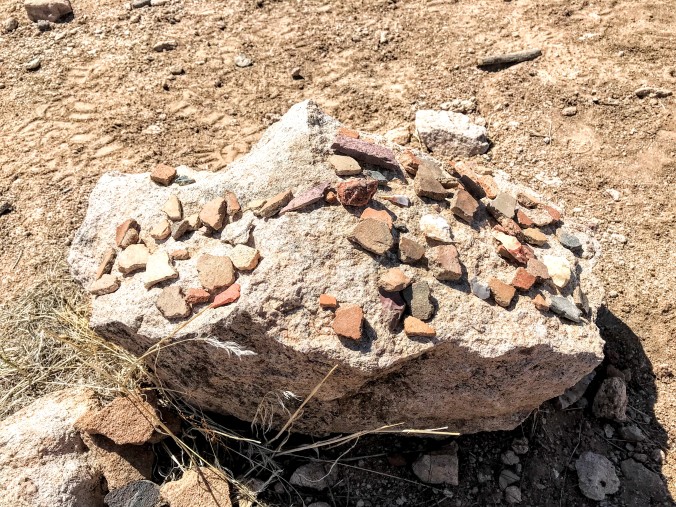 Past Garden Valley is an abandoned corral and trail going up the other side of the canyon which are part of a cattle ranch that was once there. It’s hard for me to imagine that there was enough grazing for the cattle in this rocky canyons.

The corral area of the abandon ranch. 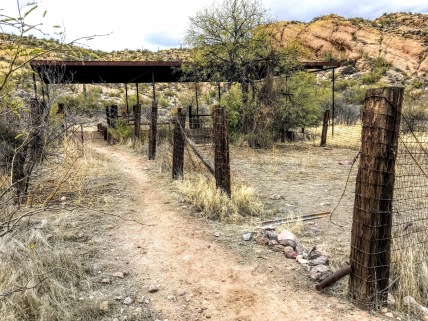 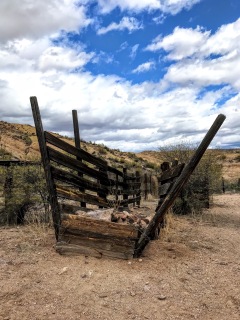 We all enjoyed this 5.2 mile hike and felt no remorse eating a big meal later that evening with our Oregon/Washington friends. I made a killer Baked Chorizo Bean Dip for the appetizer and not a morsel was left. 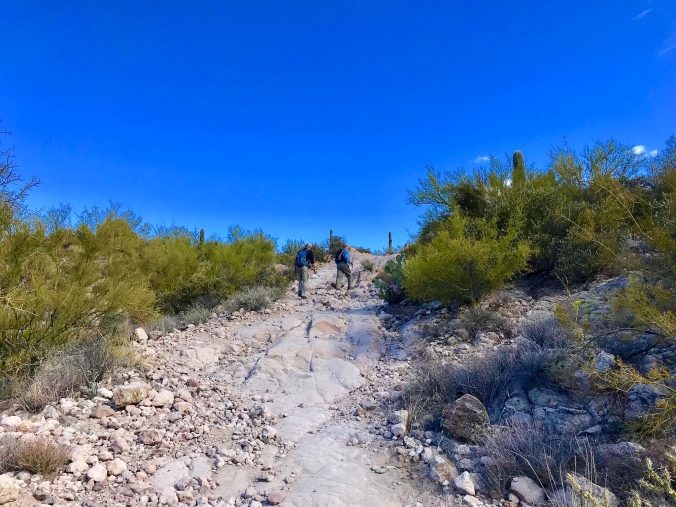 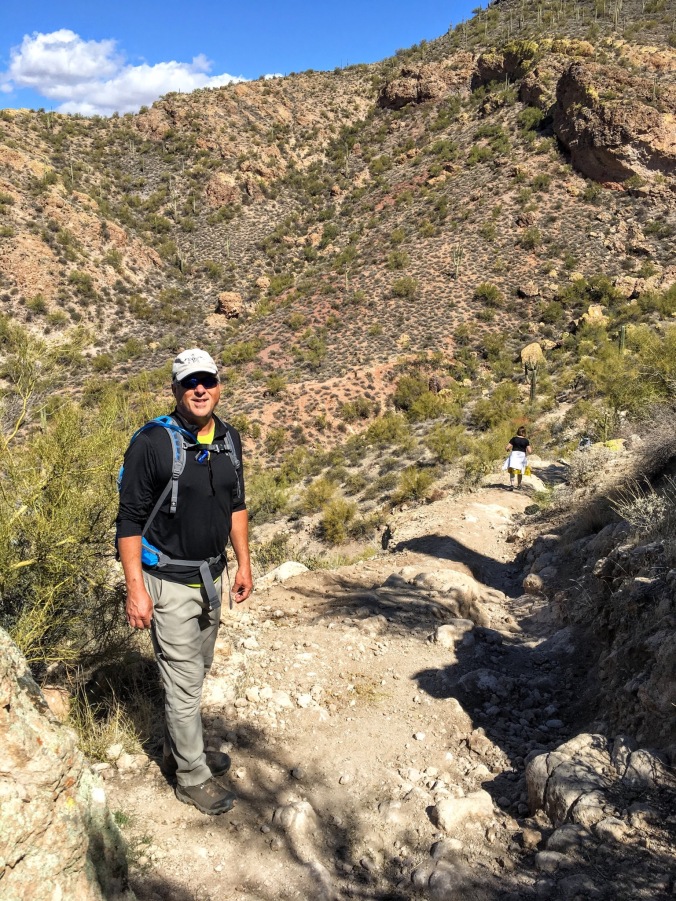 Boyce Arboretum was also on our list of places to take our Portland friends Dave and Tanya. I wrote about the Arboretum after our visit last year and knew they would enjoy the birding opportunities there as well as the great walking/hiking paths through the 392 acre property. The hummingbirds were abundant, Black Chinned, Rufous, Annas and my new favorite – the Broadbill Hummingbird. 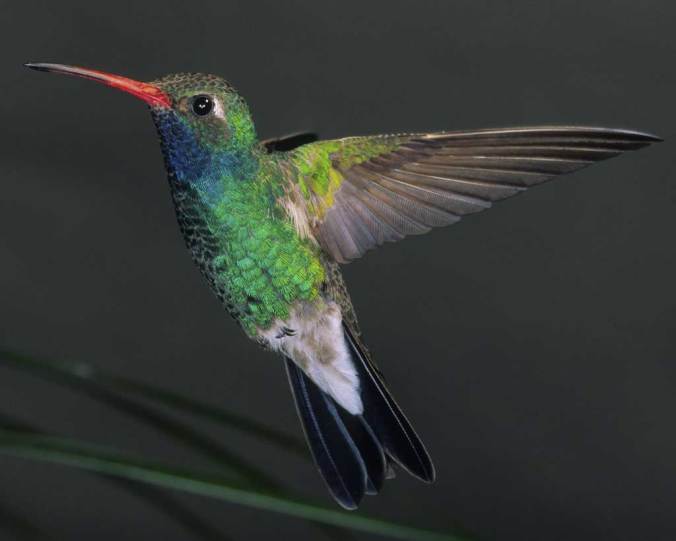 These birds are so hard to photograph so thanks to the Audubon for supplying this photo of the Broadbill Hummingbird. 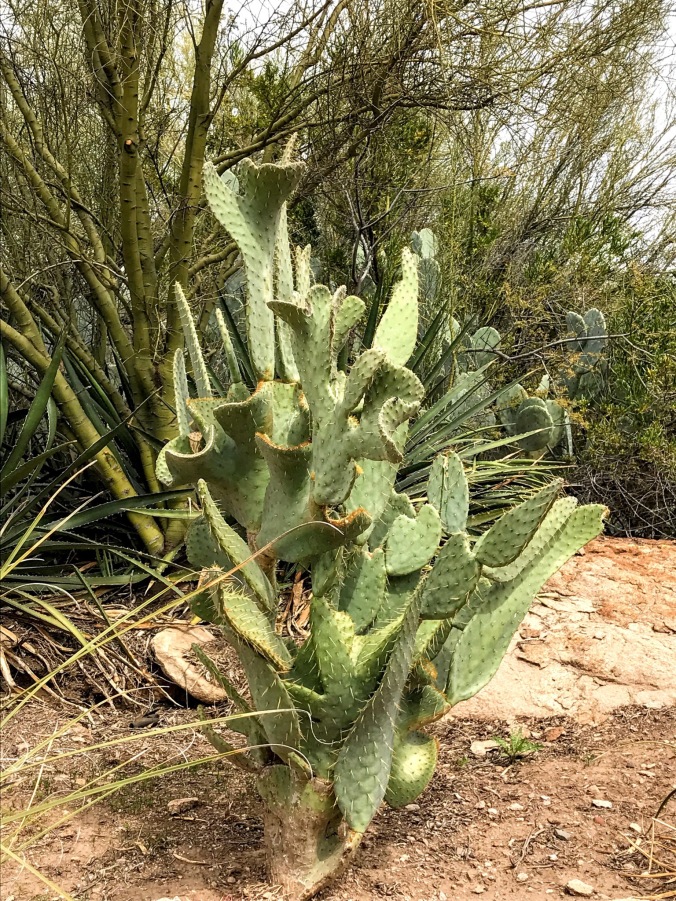 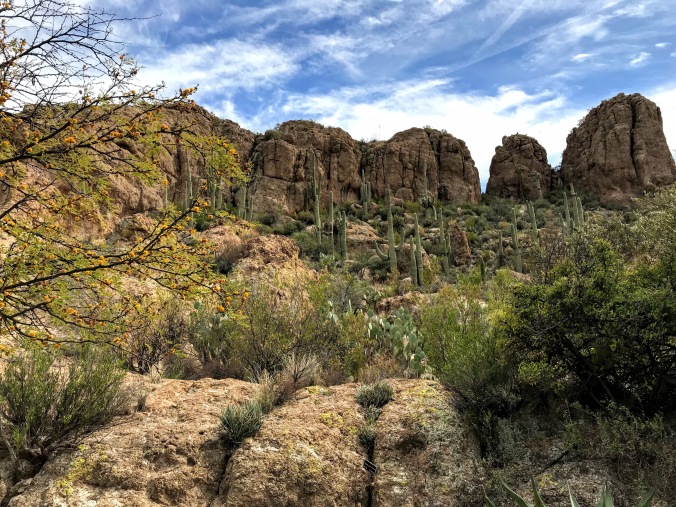 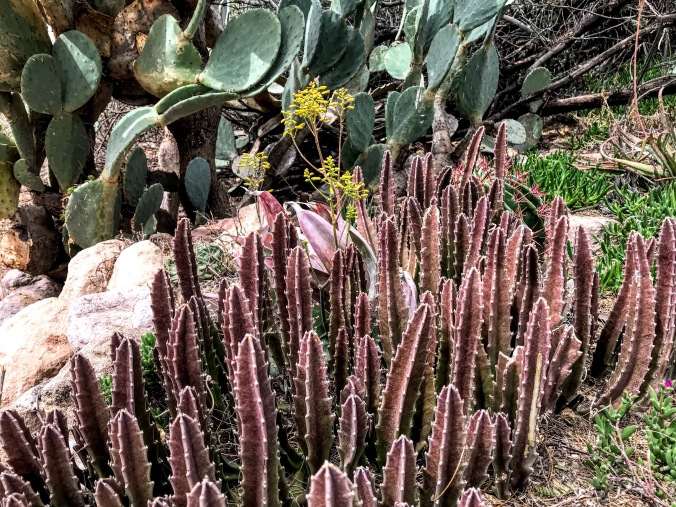 I love the plant diversity at Boyce – it is a photographers dream.

This is just a small sampling of our last two weeks but I think you get the gist…go, go, go!