I was so intrigued with the ghost town of Cisco that we visited on our Scenic Byway 128 drive near Moab that I thought it deserved its own post. The “town” doesn’t look like much and what remains is a bit creepy with an unwelcoming vibe but fun exploring none the less.

Seems creepy is good when it comes to some movies and Cisco has been featured in movies like Vanishing Point, Don’t Come Knocking, Thelma and Louise as well as the Johnny Cash song, “Cisco Clifton’s Filling Station”. 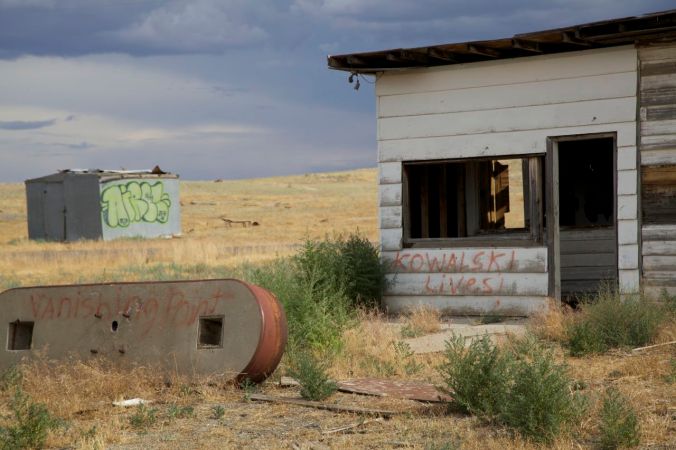 What I learned from searching the internet is that the town started in the 1880s as a saloon and water-refilling station for the Denver and Rio Grande Western Railroad. As work crews and, later, travelers came through, stores, hotels and restaurants sprang up to accommodate them. Nearby cattle ranchers and sheep herders in the Book Cliffs north of town began using Cisco as a livestock and provisioning center. Around the turn of the 20th century, over 100,000 sheep were sheared at Cisco before being shipped to market.

In 1924, oil and natural gas were discovered in the region which gave a boost to the town. At one time, Cisco was the largest producer of oil and natural gas in the state. After World War II, when Americans began a love affair with the automobile and began to travel as never before, Cisco was a welcome respite for thirsty travelers headed through the arid desert. Situated on the main highway through the region at the time (US 6/50), a number of businesses sprouted up to serve those passing through, including restaurants, gas stations, and saloons.

In the 1950’s, when the railroad began to use diesel engines, replacing the coal powered steam engines and the need for water stops, Cisco became a candidate for a ghost town. However, the small town was saved by the discovery of uranium and vanadium in the area that drew prospectors by the thousands. Cisco catered to the desert prospectors for several years, until the mining “craze” fizzled and the prospectors moved on.

Two decades later however, Cisco would not be so lucky when I-70 barreled through the region, completely bypassing Cisco and its businesses. The economy immediately declined and people moved away.

I think this may have been the general store

The town site contains many relics of a typical old west railroad town. Cisco survived long enough into the 20th century to be assigned a ZIP Code, 84515. Unfortunately for history and railroad buffs, the ghost town’s easy access and proximity to the freeway have lured vandals; the relics are heavily damaged and the town is littered with abandoned vehicles now.

According to Legends of America, one of the last businesses in Cisco was a gas station/restaurant, whose owner went to jail for shooting a man who drove off without paying for his gas. The gas station owner’s wife took over the business and ran it poorly, allegedly keeping the door locked and only serving customers when she felt like it. She had a large bad-tempered dog that frequently bit customers. It is said that if the customer got upset or kicked the dog, she turned them away, but if they kept a cool head, she would serve them.

One of Cisco’s most notable landmarks is the tiny post office. It is really small and contains only a desk and a chair 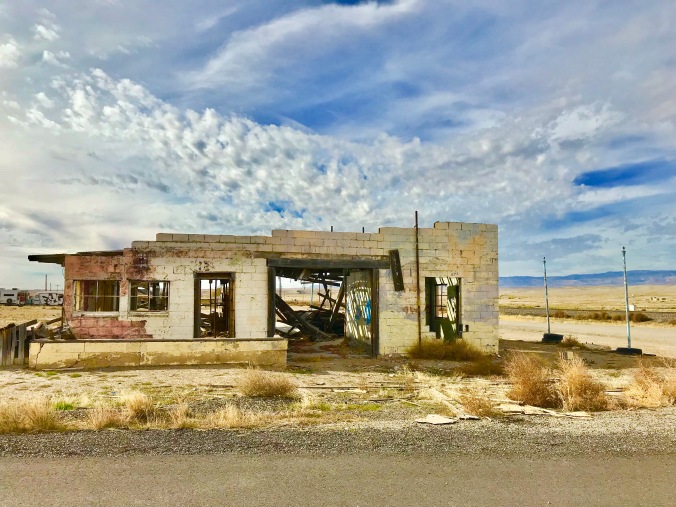 This is the filling station featured in the Johnny Cash song

Though the railroad tracks continue to be used by the Union Pacific Railroad and the California Zephyr still “flies” through, the train hasn’t stopped here in decades. Allegedly, there are still a few people who live in this desolate town, but during our quick visit we saw nary a soul, not even a roaming dog.

Apparently the state of Utah is home to over 100 ghost towns…another reason for me to come back and do some more exploring!