And so it continues… After our day of being DEAD IN THE DUNES and being towed to a Freightliner Elite Service Center in Twin Falls Idaho on Thursday, Road House was put on the service schedule for the next morning.

We got up early on Friday, packed up the pets and a bag so we would be ready to go when they knocked on the door.

Waiting and more waiting…. At 10:30 our coach was rolled into the service bay. We headed up to the customer lounge with Sucia in her crate to wait for an update. Bentley was hanging in the car as he’s not a lounge kinda guy.

Waiting and more waiting…. By 12:30 we were ready for lunch and had seen the Traeger infomercial on the big screen TV so many times that I was repeating the recipes. Time for a gourmet lunch…Subway sandwich delivered by Wally.

Waiting and more waiting…I think I was being really patient but knowing the staff were having a chili cook off at 1 pm I was beginning to wonder if anyone was really even working on our coach. After a chat with the very nice Customer Service Coordinator Rebecca, I learned that they were still diagnosing the problem. Hmm, not good news. The Service Manager said they need a couple more hours.

Tired of waiting, we decided to load up Kitty Sucia in the car with Bentley and go for a drive. I needed a cable to charge my iPad keyboard so we went to a nearby Best Buy. Got the cable and discovered that beneath the bridge we drove over was the Snake River Gorge. WOW,  what a beautiful sight right from the BB parking lot.  Out in the distance we could see waterfalls dotting the sides of the gorge.

After some further googling, we found nearby Centennial Waterfront Park down in the gorge. Again, stunningly beautiful. Bentley was thrilled as he got to go for a walk, play with sticks and run off leash as NO ONE was there. Well, it was raining off and on and windy. Really, windy…like 30 MPH windy. So maybe that’s why no one was there? 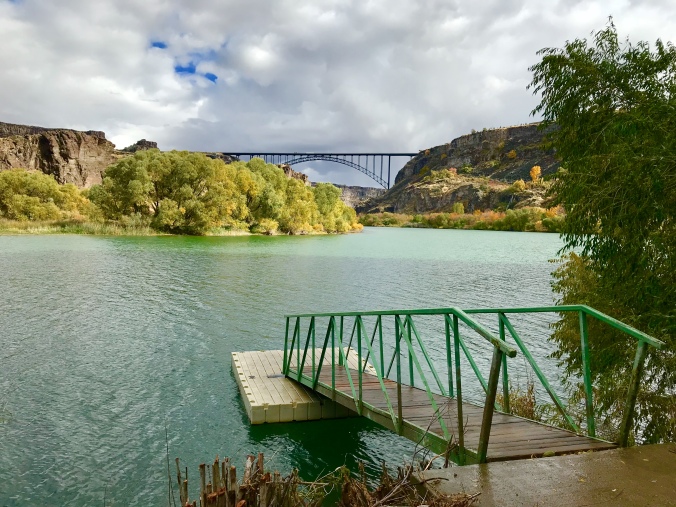 More searching on Trip Advisor suggested Shoshone Falls, also known as the Niagara of the West, is a must-see. With a 212 foot drop and a width of 900 feet, it is one of the largest natural waterfalls in the United States. 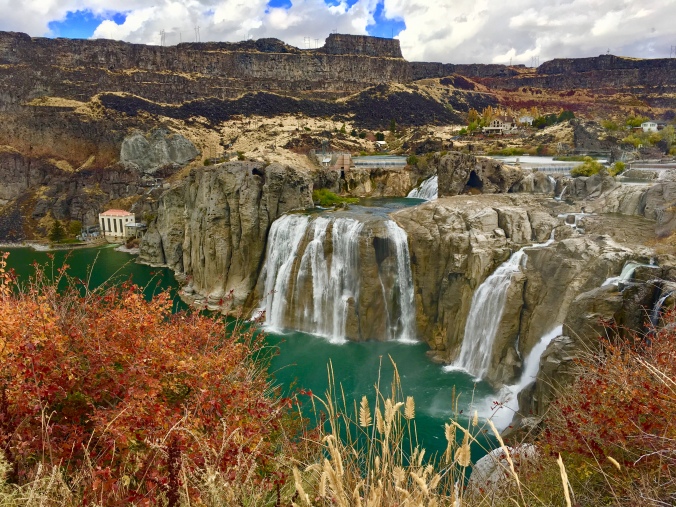 WOW, all I can say is WOW. We were both blown away and the only people there was a young couple. We happened upon them as the fellow dropped to his knee and proposed. Aww, that was so romantic and sweet. What a spectacular backdrop, maybe they will get married there too!

We left feeling a bit more relaxed but a very frustrating call to my gal Rebecca at Freightliner quickly erased that bliss. Seems they had the coach running but needed more time to diagnose some other issues. This might run into MONDAY…now I am not feeling any bliss. I calmly asked her what was causing the delay, was it a part they needed to order?  Well, she need to find out more and would call me back. Can I say at this point that communication is not their strong suit.

Waiting…so 30 minutes later she rang me back. No issue with parts but the mechanic was off at 5 pm and would be back at work on MONDAY. Seriously, this is an Elite Service Center and they only have one certified Caterpillar mechanic. Well, he was going to keep working on it until 5…lucky me! So we headed back to the service center to discuss our options. We needed water in the coach, could we stay on it there, could we drive it to the KOA just a few miles away? At this point I was way frustrated by the lack of information and the fact that had I not called back we might have not found any of this out until who knows when and our options may have been dramatically different.

Back at the service center, I had a nice chat with Rebecca. I apologized if I seemed frustrated but what were our options. After a chat with who knows who, she came back and said yes, we could drive to the KOA but would need to come back on Monday. And that was that…don’t know what the mechanic actually did to the coach, no one from the service department gave us any kind of update at all.

We got to the KOA, coach ran fine and I was way wound up by then but glad to be back in the coach with power, water and a full hook up. After a marathon venting session, I promised Wally I would let it go.

Turns out the KOA brochure was a wealth of info on the local area and things to do. With all the natural beauty we had seen earlier in the day, exploring around Twin Falls over the weekend would be fun. Bonus …there are natural hot springs and soaking pools nearby. I feel some bliss coming my way.